Just three years ago, John Brooks, born and raised in Berlin but the son of a U.S. serviceman from Illinois, was still deciding whether to represent Germany or the USA.

Brooks was among a few hundred foreign-based players with eligibility to play for the USA identified by Thomas Rongen, who served as U.S. U-20 national team coach in 2006-2011.

“At the time, MLS didn’t have a reserve league, so players on my U-20 team weren’t getting games,” Rongen said in a 2011 interview. “I started looking at young Americans playing with foreign clubs. Some went abroad as teens, but I began discovering many who had grown up abroad. I did a lot of digging, and then started getting calls because the word got out we were looking for players.”

At Hertha Berlin alone, Rongen found four players with U.S. heritage thanks to their G.I. dads: Alfredo Morales, whose father is Peruvian but served in the U.S. military, Jerome Kiesewetter, Terence Boyd and Brooks.

Brooks, who played for Germany’s U-20 national team in a 2-1 loss at Poland in November 2012, had been in camp with the U.S. U-20s a year earlier under Rongen’s successor Tab Ramos.

At age 19, Brooks won a starting job a central defender for Hertha Berlin during the 2012-13 second division season and helped it win promotion back to Bundesliga 1.

In May 2013, Ramos announced that Brooks would not be a part of the U.S. 2013 U-20 World Cup team. For his part, Brooks, then 20, said he would eventually make a decision “from his gut or heart, however you want to put it,” about whether to wear the stars and stripes or the German eagle.

Of the 10 German-raised players who have seen action for the USA under Klinsmann, Brooks, Jermaine Jones and Fabian Johnson are on the Copa Centenario squad – and all three have started the first three games as the USA finished atop Group A.

Brooks, who turned 23 last January, entered the Copa with 66 Bundesliga and 29 German second division games under his belt. He has in the past sometimes frustrated his coaches with inconsistency, but his 2015-16 Hertha season was his best ever as the club finished seventh in the Bundesliga to earn a Europa League spot and reached the German Cup semifinals.

For the USA, Brooks had 21 U.S. caps and three U.S. goals before the Copa. He had famously came on as a sub in the 2014 World Cup opener and scored the winner in the USA’s 2-1 victory against Ghana. Brooks, who scored in the 4-3 friendly win at the Netherlands in June 2015 after igniting the counterattack, had started in central defense during the USA’s disappointing fourth-place finish at the 2015 Gold Cup. But if there were any doubts that he was the right man to pair up with Geoff Cameron in the central defense, they've been erased during the wins over Costa Rica and Paraguay as the USA finished first in Group A to set up a quarterfinal with Ecuador.

The 6-foot-4 Brooks has looked equally unbeatable in the air and on the ground, he’s a precise passer, and during the 11th minute of the 1-0 Paraguay win broke up a counterattack breakaway so well it made highlight reels. Faced with a 3-v-1, Brooks adjusted during retreat by bad-pedaling, then sprinted to catch up and thwart Miguel Almiron with a clean slide-tackle in the penalty area. 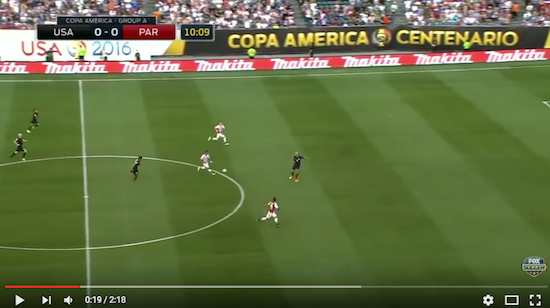 "I think John Brooks, with a performance like this, I guess all of Europe is watching that," Klinsmann said after the Paraguay game. "This is a big statement what he did tonight."

The USA took a 1-0 lead with goal by Clint Dempsey in the 27th minute and survived playing a man-down for 42 minutes (after DeAndre Yedlin's ejection) thanks much to Brooks marshaling the defense alongside Cameron and behind Michael Bradley.

Among the big lineup question marks for Klinsmann had been the central defense pairings, where other options include Matt Besler, Steve Birnbaum and Michael Orozco, besides those not picked for the Copa roster: Ventura Alvarado, Brad Evans, Omar Gonzalez and Tim Ream.

Brooks is the youngest of them all, but has been playing like a seasoned veteran, likely to marshal the central defense for many years to come.