How refs deal with trash-talking

"Look at the scoreboard" and "You got nothing" are two common things that trash-talking players say.

Yet when I started refereeing in 1978, I did not hear any trash-talking. The first time that I witnessed players talking smack was watching a NBA game on TV around 1990. I am not stating that taunting originated with the NBA, I am simply writing that’s the first time that I witnessed it although you could say that Muhammad Ali talked smack long before NBA players did. Eventually, it spread to other pro sports and then to youth sports.

The first time that I heard trash-talking on a soccer field was over a generation ago. Although talking smack does not receive the same amount of publicity as diving, both are cancers on the Beautiful Game. And though some in the media have glorified trash-talking as a display of a player’s enthusiasm or competitiveness, you can easily be enthusiastic or competitive without resorting to demeaning opponents.

Trash-talking inevitably leads to opposing players becoming annoyed and the challenges consequently becoming more robust during the game so it needs to be stopped immediately by the referee. But it’s not easy to detect as, although taunting tends to occur near the ball, not all the time and there are only three officials along with 22 players on a large soccer field. Chances are, if an official hears a player talking smack, it’s not the first time it occurred during that game.

Refs are to be especially vigilant for trash-talking by the attacking team after a goal is scored. Officials should, at the very least, glance at the player who scored as a scoring player sometimes trash talks. Other times for officials to be particularly aware of taunting is after a foul is whistled or a player is megged. 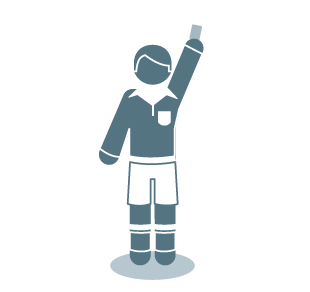 When an official hears trash-talking, the ref needs to at least verbally warn that player and let everybody on the field be aware that talking smack will not be tolerated. If it continues, the player would be cautioned for unsporting behavior. The ref could also immediately caution a trash-talking player. Should the ref hear a trash-talking player utter a curse word or a slur word, such as a racial slur, the player is sent off for offensive, insulting or abusive language. No exceptions!

Taunting is considered such a blight upon our sport by the high school rules committee that it’s a straight red-card offense in high school soccer.

I was refereeing a boys U-19 division in which one of the teams was a problem. The coach did not have much control of his players and they did not truly respect him or the officials. And many of the players on the team liked to talk smack. Opposing teams did not like playing them as the players were not respectful and refereeing them was truly a chore.

They are good players, however, yet taunting consistently landed them in hot water. As is often the case with players talking smack, it could be picked up by an opposing player before any of the officials at first and the game can go south from there. So it’s not a surprise that of the cautions and sendoffs in this division, nearly all the cards were in games that this team played. Because of the vigilance of the officials in clamping down on trash-talking, this squad had a player suspended for nearly every game they played. So they were faced with a choice -- win or trash talk. They chose winning and finally stopped trash-talking, to the approval of everybody else in that division.