Both players are currently part of the U.S. U-17 national team residency program in Bradenton, Fla., and Durkin is U.S. U-17 captain.

Durkin, who hails from Glen Allen, Virginia, and spent five years in the D.C. United academy program, will train with D.C. United through the summer and return to Bradenton in August to continue preparations for qualifying play for the 2017 U-17 World Cup. He is expected to play for D.C. United in its U.S. Open Cup game at Fort Lauderdale on Wednesday.

“We are excited that Chris will begin his professional career with us,” said D.C. United GM Dave Kasper. "His maturity, ambition and understanding of the game are unparalleled for a player of his age. Under the leadership of Academy Director Nolan Sheldon, Chris rapidly excelled in each of his five years in our Academy and was integrated into first team trainings and friendlies for the past year."

Carleton can be considered a Atlanta United Homegrown player because the club has merged with Georgia United Soccer Alliance (GUSA), for which Carleton starred in the U.S. Soccer Development Academy.

“He probably has the biggest potential to be a professional out of all the kids in our club,” Georgia United technical director Tony Annan told Soccer America last year after Carleton’s goals helped Georgia United’s U-16s become the only non-MLS club to reach the Development Academy national championship semifinals.

Reyna and Fuentes strike for U.S. U-15 boys in Croatia. The U.S. U-15 boys national team, coached by Dave van den Bergh, fell to host Croatia (2-1) and Serbia (2-0), and beat Montenegro (1-0) at a four-team tournament in Zagreb. Giovanni Reyna (NYCFC) scored the decider against Montenegro. Gilbert Fuentes of Northern California’s Ballistic United scored the consolation goal against Croatia. U.S. U-15 lineups.

U.S. U-19 women train in New Zealand. U.S. U-19 women's national team coach Jitka Klimkova  has taken a 20-player squad to New Zealand for a June 8-20 training camp that will include two games against New Zealand’s U-20 national team. Eleven of the U.S. players are collegians while nine are youth club players. Fourteen were born in 1997, four in 1996, and two in 1998.

U.S. U-17 girls beat Swiss U-19s twice. Coach  B.J. Snow’s team, which is preparing for the U-17 Women's World Cup in Jordan (Sept. 30-Oct. 21), beat Switzerland's U-19 team, which is is preparing for July's U-19 European Championship, 3-2 and 2-1. The Colorado Rush’s Civana Kuhlmann  scored twice and assisted while Taryn Torres (FC Dallas) scored the USA’s third goal its first win. Frankie Tagliaferri (PDA) and Rachel Jones (Tophat SC) scored in the 2-1 win. 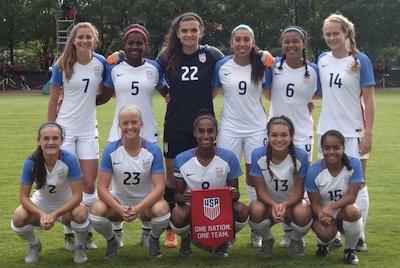