Are these guys for real, or what?

A penalty kick. A regular occurrence in soccer. Any experienced referee will have had plenty of them to deal with. He should then, surely, know what the rules say.

The goalkeeper is not allowed to move forward, off his line, until the kicker has made contact with the ball. Similarly, the other players must wait until the kicker strikes the ball before they can enter the penalty area (including the D).

We’re at the top level of the sport, here. A European Championship game between Spain and Croatia. Dutch referee Björn Kuipers has awarded Spain a penalty kick. And this is what we get. A total collapse of the refereeing responsibility.

Take a look at the picture. No minute attention to detail is necessary. The rule-breaking is immediately obvious. But not, apparently, to referee Kuipers. He does not spot the encroachment, which is blatant. Nor can he see that the Croatian goalkeeper Danijel Subasic is nearly three yards off his line. 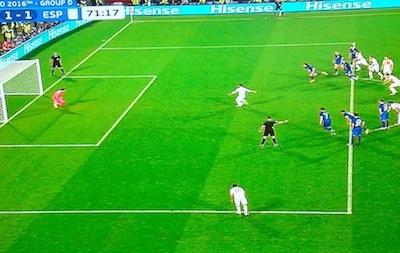 To add to this appalling officiating, we have that guy standing on the goal line -- one of the Additional Assistant Referees used by UEFA. As it happens, the rulebook very specifically spells out one of the AAR’s function at a penalty kick: to indicate whether “the goalkeeper moves off the goal line before the ball is kicked.” Is this guy asleep, then?

It is generally accepted that goalkeepers will be allowed one step forward -- on the grounds that it is impossible to tell when that first movement is made -- whether at the exact moment that the kicker strikes the ball, or immediately before or after. Fair enough.

But this picture shows the situation well before the ball has been struck -- with the keeper Subasic already yards off his line. There is absolutely no excuse for the AAR not to have detected the illegal movement. But, to be fair to the AAR, there’s one thing we don’t know. The AAR doesn’t have a flag or a whistle; he communicates by radio with the referee -- and we don’t know anything about that. Maybe he did tell Kuipers. But that seems unlikely -- why would the referee ignore that information?

So, not for the first time in a major UEFA competition, goalkeeper cheating goes unpunished, and the course of the tournament may well have been affected.

Why is it so easy for goalkeepers to get away with such obvious cheating? A clue -- a solid clue -- comes from listening to the TV commentators. These are guys who are supposed to know the rules of the game. This commentator - he’s not worth identifying - merely remarks that Subasic “gets away with stepping out in front, but every goalkeeper does that.”

So no big deal, then. Far from being excoriated for cheating, the goalkeeper is now a hero. As the other, equally pathetic, TV commentator had it, “the man of the moment.”

Indeed, this goalkeeper cheating seems now to be an acceptable part of the game. In this game, the Spanish players and bench must have been aware that they were getting shafted, big time. Yet they accepted the injustice. They should not have done -- in fact they had every right to raise merry hell. Instead, they kept quite, apparently not aware of just how bad the referee’s decision had been.

I applaud their restraint, not least because I deplore players questioning decisions, or mobbing referees … but what is it going to take to get FIFA or UEFA or the referees themselves to make sure their own rules are complied with?

This was utterly poor refereeing. Abysmal. Referee Kuipers should have ordered the kick to be retaken. Goalkeeper Subasic should have been yellow-carded. This is not to say that Spain would have scored at their second attempt -- maybe yes, maybe not. This is not about who wins the game.

The point is much more fundamental than that. It is to ask what the hell kind of sport soccer can be when it can feel comfortable turning a blind eye on players who flagrantly breach its rules, when it condones deliberate cheating?