By some divine convergence, one of the best players to ever pull on a USA jersey is about to start a new phase in his career with the top team in MLS and could make his debut on the Fourth of July.

The Rapids presented Tim Howard at a press conference Tuesday at Dick’s Sporting Goods Park, accompanied by head coach Pablo Mastroeni, technical director Paul Bravo, and team president Tim Hinchley. Howard, who signed a deal in January by which he returned to MLS after 13 years in England with Manchester United and Everton, expects to hit the ground running. He last played in MLS as a MetroStar in 2003. 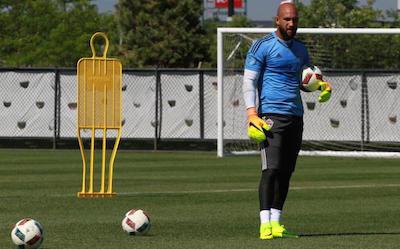 “The sooner I can get on the field, the better,” said Howard, who will be eligible to play against Portland Monday when the secondary transfer window opens. “It's been a long time coming just because of the way the seasons are structured both here in MLS and abroad."

Howard said he isn’t fazed by jumping right into MLS after completing the English season in May and spending the last six weeks with the U.S. team preparing for and competing in the Copa America Centenario. He’s not played much lately -- after riding the bench in most of the games starting in January, he was honored at Everton’s final home game and played for the USA against Colombia Saturday in the third-place match -- but by following a zealous personal training program hasn’t lost much of his edge.

“I’m fitter at 37 than I was at 27,” he said. “I hire my own physios, my own acupuncturists, I’ve got countless amounts of equipment in my house to make sure I’m fit and ready and able. When the time comes and the season finishes and we lift something, it’ll be great. It’ll be great to get away for four weeks and sit on the beach, but right now, physically there is no problem.”

Howard and Mastroeni were USA teammates for eight years, and the Rapids head coach is convinced his new goalkeeper will be just as influential as midfielder Jermaine Jones, acquired via a trade with New England in March. Though Jones has played only a handful of games because of a suspension and national-team duties, the Rapids lead the overall standings with a 9-2-5 record, are unbeaten at home (7-0-1), and are the league’s stingiest team with just 11 goals conceded.

Howard’s Designated Player deal is worth $2.575 million, which is by far the largest salary on the team. It appears the only low card in this hand has been dealt to keeper Zac MacMath, whose done nothing to warrant losing his job but, given the most extraordinary circumstances, certainly will.

“Now we have a guy that’s proven,” said Mastroeni. “We have a guy that’s an outstanding character off the field, on the field. He holds himself to the highest standard that you can in football, he embodies everything that we want here at this club from a drive perspective a ‘put your arm around a young guy’ perspective. A guy that’s going to push this group to where we want to go which is the playoffs and beyond this year.”

During the press conference Howard joked that the lines of communication between him and field players sometimes were jammed, perhaps by design. There’s a new dynamic in place that he will strive to honor.

“Of course, coach Pablo who is a dear friend of mine and now he's a coach and I have to do everything he says,” Howard said. “When we played together from 2002 to 2009, I didn't always listen, but I promise I'll be on my best behavior now.”