Miami FC, the NASL expansion club that finished last in the Spring Season, continued its spending spree with the acquisition of Kwadwo Pokufrom MLS’s NYCFC ahead of the Fall Season kickoff on Saturday.

Miami FC, which late in the Spring Season acquired midfielder Michael Lahoud from MLS's Philadelphia Union and midfielder Richie Ryan from Jacksonville, welcomes the 24-year-old Poku after he scored five goals in 34 appearances for NYCFC in 2015-16. 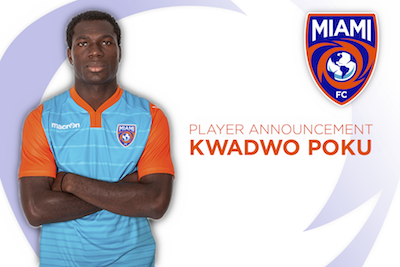 “We are thrilled to be bringing on a player like Poku onto our roster,” said Miami FC Technical Director Mauro Pederzoli in a press release. “Poku adds a physical presence to our attack and we believe he will help us achieve our goals for the fall season.”

Poku, who came to the USA from his native Ghana in 2010 and played for the NPSL’s Georgia Georgia Revolution and NASL’s Atlanta Silverbacks, debuted for Ghana in October of 2015.