Twenty-five clubs have been accepted so far by U.S. Soccer to compete in the Girls U.S. Soccer Development Academy, whose inaugural season kicks off in fall of 2017. U.S. Soccer has not specified how many clubs will take part in the 2017-18 season, during which teams will compete in U-14/15, U-16/17 and U-18/19 age groups.

The Boys DA launched in 2007 with 64 clubs and now has 74 full DA clubs and more than 100 when including clubs that field only lower age group teams. The U.S. Club Soccer-sanctioned ECNL, launched in 2009, fielded 79 clubs during this 2015-16 season.

Of the first 25 Girls DA clubs, only six were not part of the ECNL during the 2015-16 season: Beach SC, Cincinnati, Lamorinda, the Washington Spirit, the Boston Breakers and Seattle Reign. The Breakers and the Reign, both affiliates of the pro NWSL league clubs, have joined the ECNL for the 2016-17 season. The NWSL's Sky Blue FC has partnered with New Jersey club PDA for Girls DA play. With the Spirit, Orlando Pride and Portland Thorns, six of the NWSL's teams, so far, are part of the Girls DA.

A survey of a handful of DA-accepted ECNL clubs indicates that ECNL clubs are planning to field teams in both leagues in the 2017-18 season.

According to U.S. Soccer, the first 25 clubs have a total of 119 coaches with a U.S. Soccer A or B Coaching License, including 91 coaches employed on a full-time basis. And 307 players for from the 25 clubs have been called in by U.S. national teams, youth and senior. They will be providing 276 full scholarships “with a total of $1.49 million of scholarship funds being contributed,” according to U.S. Soccer’s press release.

The applications (the 2017-18 deadline for which is July 1) for the Girls DA are evaluated by the U.S. Soccer technical staff on:

• Leadership of the club and quality of the coaching staff.
• Desire to embrace and promote the core values of the program.
• U.S. Soccer license levels of coaching staff.
• Infrastructure of the club and the resources currently being invested in development (facilities, scholarships, staff to player ratio, etc.).
• History of player production for youth national teams, the senior women’s national team and professional leagues.
• Market and depth of the player pool, geographic location and travel implications and proximity to other elite clubs.

Southern California clubs So Cal Blues and Slammers FC won ECNL U-14 and U-18 national titles, respectively, this week in Oceanside, California, where U-15, U-16 and U-17 semifinalists were determined. So Cal Blues clinched the U-14 title with a 4-0 win over Ohio Premier. Slammers FC defeated the Michigan Hawks, 2-0, in the U-18 final.

The U.S. U-20 men’s national team opened the 2016 NTC Invitational Center in Carson, Calif., with a 2-0 win over Costa Rica on goals by Jeremy Ebobisse and Sebastian Saucedo. 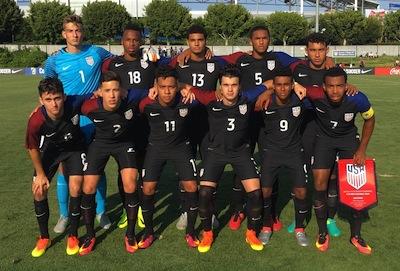 The USA, coached by Tab Ramos, faces Panama, which opened with a scoreless tie with Japan, on Friday at 10 p.m. ET. All the games are streamed U.S. Soccer’s YouTube page.

U-20 women convene in Chula Vista

Coach Michelle French  has named a 19-player squad for the U.S. U-20 women's national team's July 6-15 training camp in Chula Vista, California. The team is preparing for the 2016 U-20 Women’s World Cup in Papua New Guinea (Nov. 13-Dec. 3), where the USA will face France, New Zealand and Ghana in first-round play.

In latest competition, on a trip to Papua New Guinea in May, French’s team beat Papua New Guinea, 10-0, and fell to Japan, 5-0. Afterward the team had a training camp in North Carolina (June 15-23).