The cases for and against compensating youth clubs

Schweinsteiger joined Bayern Munich at age 14 from 1860 Rosenheim. Because Rosenheim contributed to Schweinsteiger’s development after his 12th birthday, it was entitled to a portion of the transfer fee Manchester United paid Bayern Munich, as stipulated by the FIFA’s “solidarity mechanism.”

When Tottenham Hotspur paid a transfer fee of a reported $4 million to acquire DeAndre Yedlin from the Seattle Sounders in 2014, Crossfire Premier, for which Yedlin played before joining the Sounders’ youth program, did not receive a solidarity payment.

That’s because MLS doesn’t adhere to FIFA’s Regulations on the Status and Transfer of Players (RSTP) that stipulate solidarity payments -- and U.S. Soccer does not enforce RSTP.

In June 2015, Crossfire Premier, Dallas Texans SC and Sockers FC Chicago filed complaints with the FIFA Dispute Resolution Chamber (DRC), claiming a combined $480,500 on transfers involving Yedlin, Clint Dempsey and Michael Bradley. Crossfire claims it’s entitled to a $60,000 share of the Yedlin transfer fee. (About $20 million have changed hands during the pro club transfers of Dempsey, who played youth ball for the Texans.)

Non-MLS youth clubs have long lamented not receiving solidarity payments or training compensation as stipulated by RSTP. The frustration no doubt ramped up with a scenario such as the Yedlin move to English club Tottenham, which sent 75 percent of his transfer fee to the Sounders (the other 25 percent went to MLS), while Crossfire got nothing although Yedlin spent more time with Crossfire than with the Sounders’ youth program.

The latest move in the quest for compensation came when Crossfire, the Texans and Sockers filed a class action lawsuit in a federal court in Texas against the MLS Players Union (MLSPU).

Here are some key questions and answers about the issue:

Various reasons have been given, including child labor laws, ruining non-profit status, NCAA eligibility and anti-trust. Lawyers for the youth clubs say none of those are applicable.

Why should U.S. youth clubs, which charge kids thousands of dollars in fees, expect to be compensated?

The clubs that have appealed to the DRC and are a part of the class-action suit cite that the players in question were scholarshipped. And that by receiving compensation for such players, they will be able to increase the amount of financial aid to other players.

What’s the difference between the solidarity mechanism and training compensation?

The solidarity contribution is a percentage of a transfer fee that goes to any club that has contributed to the player's “education and training” from the player’s 12th to 23rd birthday. If, for example, a player played with a club from age 12 to 18 and moves to a professional club, then transfers before the expiration of his contract to another club for $1 million, the youth club is entitled to a solidarity contribution of $50,000. If the player played for various youth clubs, those clubs would split the solidarity payment according to the RSTP formula.

FIFA’s Regulations on the Status and Transfer of Players: 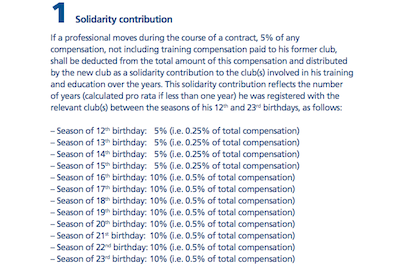 Training compensation is a fee from the first professional club that signs a player to the youth club(s) the player played for after his 12th birthday. It is also paid each time "a professional is transferred between clubs of two different associations" before the end of the season of his 23rd birthday.

Why did the youth clubs sue the MLS Players’ Union?

Why would the MLSPU be against solidarity fees and training compensation?

Because it believes that such fees would come out of the earnings of the players it represents. MLSPU executive director Bob Foose told ESPN FC’s Jeff Carlisle that, "The effect of those payments is to take money and opportunity away from our players. If you were to implement this system, it would make it even harder for those players to get jobs overseas because it would add a tax on [their transfer]. And when you add a tax, it primarily -- if not totally -- comes out of the players' pockets.

"In the case of lower-profile players, it makes it not worth it to sign an American player at all because for guys that aren't on the high end, you're talking about fees that are 300-400 percent of what the players would get paid or their transfer fee.”

Does the MLSPU have a point?

On training compensation, if MLS, NASL or USL clubs were forced to pay in a similar manner to major European clubs, this could make them think twice about signing unproven U.S. talent. For example, MLS teams signed 2016 second-round draft picks at $51,000 salaries. If they had to shell out another $50,000 in training compensation, would they even bother giving such players a chance?

“The youth clubs were very clear to articulate they view the world $2,000 at a time for money coming into the club, because every found $2,000 is giving some young kid a fee scholarship at the bottom level of the club,” said attorney Lance Reich after an October 2015 meeting U.S. Soccer hosted that included representatives from MLS, the MLS Players Union, NASL, USL, youth clubs and the U.S. Soccer Development Academy.

What would be the best way for this to play out?

There have been reports of foreign clubs ready to send funds in accordance with RSTP to U.S. youth clubs, who never receive them.

“Our primary claims are for solidarity contributions, which will normally only be about 2-3% of the transfer fee under the FIFA system. Right now, MLS is simply keeping this money (or the foreign professional club is keeping it when a player is transferred to the U.S.).