Klinsmann to England? The story that won't go away

Since Roy Hodgson stepped down as England coach on June 27, one name that keeps popping up as a candidate to succeed Hodgson is U.S. national team coach Jurgen Klinsmann.

There has been no confirmation that the Football Association has asked U.S. Soccer for permission to speak to Klinsmann, but reports in the English press that he is a leading candidate for the job persist.

What makes the situation unusual is Klinsmann has not quashed the reports. His last tweet or Facebook post was after the France-Germany World Cup semifinal on Thursday.

On Sunday, the Independent reported that Sunderland manager Sam Allardyce is the only English candidate being considered by the three-man FA panel and Klinsmann is his only serious rival.

The tabloid Daily Mirror, without giving any sources, reported that Klinsmann was "free to rescue England from their Euro 2016 nightmare."

It suggested that Gulati wouldn’t "shed a tear if Klinsmann took charge of England," and at the heart of the "simmering row" between Gulati and Klinsmann was the German's supposed unhappiness with Gulati's comments on the afternoon of the USA-Costa Rica Copa Centenario game questioning recent results. 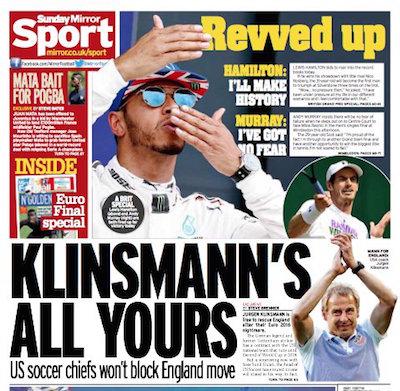 The FA has not released what it is looking for in its next national team coach or what will be the priorities for the coach. Without that criteria, it's impossible to say who might be a good candidate for the position.

In quotes that appeared in the Guardian and other English papers on Friday, Germany national team general manager Oliver Bierhoff, Klinsmann's close friend dating back to their playing careers, suggested Klinsmann was in discussions with the Football Association and would be a good fit without getting into the specifics of what he knew about any discussions between Klinsmann and the FA or what the FA was looking for.

Bierhoff set the German national team, which Klinsmann helped reorganize more than a decade ago, as the standard England needs to attain.

“Perhaps it is an advantage that good players go to England and other countries," he said, "so our clubs have to bring other players through. But since the arrival of Jurgen Klinsmann -- who I think is in discussions with England -- we have also given the national team a certain pride, atmosphere and organization. The success of the story is the high quality but also the good organization and good atmosphere we have in the group.”

Bierhoff, who was the German national team general manager when Klinsmann coached the team, added that Klinsmann has the attributes to succeed in England.

“He would be a good fit," he said. "We started in 2004 together and he’s not always, how can I say, nice to handle because he wants to change [things]. But he brings motivation. He has the courage to make difficult decisions and, perhaps, you need something like this"