The NWSL was mercilessly ridiculed by Seattle Reign coach Laura Harvey and U.S. women's national team players for the league's decision to allow the Reign's road match against the Western New York Flash to be played on a baseball field with dimensions of 100 by 58 yards.

The problem stemmed from a scheduling conflict. Rhinos Stadium, the Flash's home, was unavailable because of Rochester's SummerFest 2016 concerts featuring TLC at the facility.

But instead of rescheduling the game -- its seventh straight at home -- the Flash went ahead with the game and moved it to Frontier Field, the downtown baseball stadium where the USL Rhinos played for many years. Indeed, the Flash promoted the stadium as a "special place that will bring back countless memories for soccer fans in Rochester," according to Flash general manager Rich Randall.

The game drew 4,314 fans -- the Flash's second largest crowd of the season -- and they went home happy as the Flash won, 3-2, to pull to within two points of the first-place Portland Thorns, who dropped their first game of the season on Saturday.

But the images were brutal: the narrow markings of the field, far away from the sight of fans, made to look all the narrower by the placement of the cameras. Instead of playing the game on the baseball infield, like the Rhinos did, the game was confined to the baseball outfield.

That's what set off Reign coach Laura Harvey -- the decision not to configure the field like it was set up for the Rhinos.

“I was told the field was 110-by-61," she told the Rochester Democrat & Chronicle."That’s 100-by-58. I got lied to the whole week. I’m not making excuses. We knew what they were going to do but that’s not acceptable. This league is supposed to be professional. That’s not good enough.” 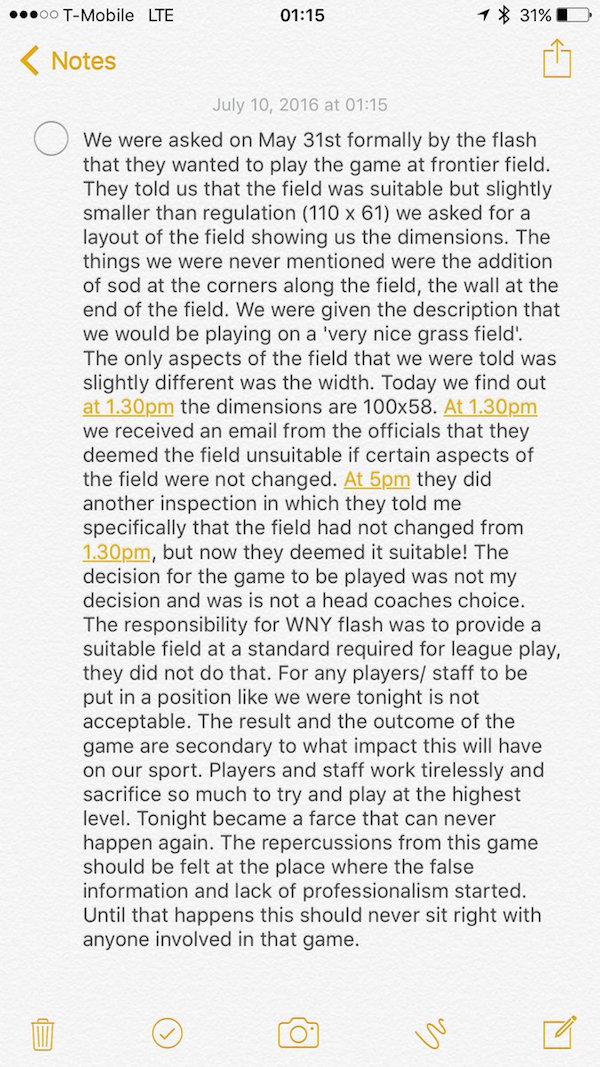 "The Western New York Flash hosted a home match at a different venue due to Rhinos Stadium not being available. The field dimensions were not up to our standards, but due to various factors, the league office made the decision to grant an exception for this evening’s match. In retrospect, we made the wrong decision. As a professional league, we need to ensure that the integrity of the game is always respected both on and off the field. We did not do that tonight and we apologize to the NWSL players, coaches and fans. In the future, we will ensure that every NWSL match meets our standards.”

But that did not satisfy U.S. star Megan Rapinoe, who plays for the Reign but was with the USA for its game against South Africa.

Of course @NWSL has to apologize,but all @JeffPlush said was"we knew it wasnt up to standard,approved it anyway, sorry" Apology not accpeted


I sincerely hope @JeffPlush understands how disrespected the players feel in this moment. Some players play for almost no money, the least


They should be able expect from @nwsl is respect and fair treatment.