U.S. women's national team coach Jill Ellis cut down her roster to 18 players for the 2016 Olympic Games. Just even players return to the Olympics after helping the USA to the gold medal in 2012 in London. Four players weren't on the  2015 Women's World Cup championship team. 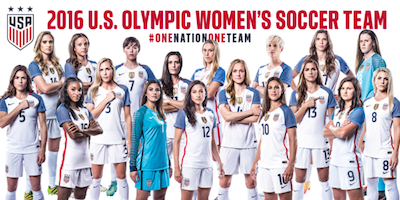 Midfielder Megan Rapinoe, who suffered a knee injury in December and has not played in 2016, made the team, as did Alyssa Naeher, Whitney Engen and Allie Long, who all won tight battles for the remaining positions on the 18-player squad, five less than the 23 players who went to the World Cup.

Mallory Pugh, Crystal Dunn, Lindsey Horan and Long are the four players who didn't go to Canada a year ago. At the beginning of the year, few would have given Long or Pugh a chance to make the team.

"The last few camps capped a nine-month evaluation process and the players certainly made it a real challenge to narrow the roster down to 18," said Ellis in a statement. "We've got a great blend of players with experience at the Olympic Games and in major events along with the youthful energy of some players who did not play in the Women's World Cup last summer. As a coach in the Olympic Games, you want to put together a group capable of reaching the top of the podium while also being mindful of getting players prepared for the next World Cup, and I think we've done that."

Carli Lloyd, who has just returned from a knee injury of her own, Tobin Heath and Hope Solo were named to their third Olympic rosters, while Solo was also an alternate in 2004

Harris lost out to Naeher as the backup to Solo in goal. Engen, the holdover, beat out Sonnett, a rookie out of Virginia, and Long edged Mewis with a late rush. The Portland Thorns veteran did not rejoin the national team until the April friendlies against Colombia.