Bravo, who scored two of his 15 goals for El Tri at the 2006 World Cup, arrives from Chiva Guadalajara, where he spent most of his club career and scored 123 goals. 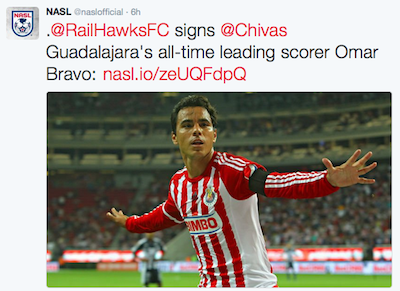 “He adds so much,” RailHawks coach Colin Clarke said. "Obviously the first thing you look at is his goals and his goalscoring pattern. Wherever he’s been he has always been prolific. He’s a national team player, capped over 60 times. The other little intangibles are going to be his experience and having won championships and been through tough times and coming out the other side.”

He is the second former Mexico World Cup player to arrive in NASL this summer, following midfielder Gerardo Torrado's arrival at Indy Eleven.