Slammers FC was named ECNL “Overall Club Champion” for the 2015-16 season. The Newport Beach, California-based club won 2016 ECNL national titles at U-15 and U-18 divisions and its teams reached the quarterfinals in four of the five ECNL age group national championships and the semifinals in three.

Current Slammers players include U-15 defender Kate Wiesner, who played for the U.S. U-17 girls national team in its successful quest to qualify for the 2016 U-17 Women’s World Cup. Slammers alum include defender Natalie Jacobs, a rising sophomore at Notre Dame who helped the U.S. U-20s qualify for the 2016 U-20 World Cup, and 2016 Olympics-bound Christen Press and Whitney Engen.

The Overall Club Championship is based on “consistent competitive excellence across every age group in the club.” 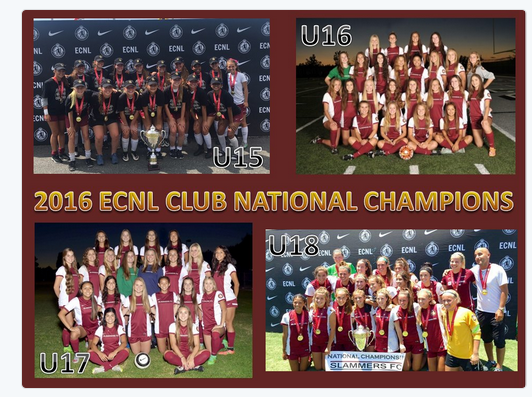 Citing that there are too many cases of showcase tournaments and summer camps promoting college coaches' appearances when they aren't actually committed to attend, the National Soccer Coaches Association of America (NSCAA) has created the "Showcase Integrity Program."

The program enables college coaches to report showcase events that are using their name or school name without approval.

“There are many excellent showcase events that college coaches or their staff will be attending,” said Sasho Cirovski, chair of the NSCAA Men’s Division I Membership Group and men’s coach at the University of Maryland. “We want youth coaches and players to be able to trust the event they are participating in and having the best experience possible.”

After a coach reports the false advertising through the NSCAA College Services program, the NSCAA will take steps, up to and including legal action, to have the showcase remove that information.

“Players participating in college showcase tournaments and summer camps can reap lots of benefits, including experiencing different competition and playing in front of college coaches,” NSCAA CEO Lynn Berling-Manuel said. “We want to make sure they are receiving what’s advertised."

The U.S. U-18 women’s national team fell, 1-0, to England during its July 6-15 training camp at the English FA's St. George’s Park training center. 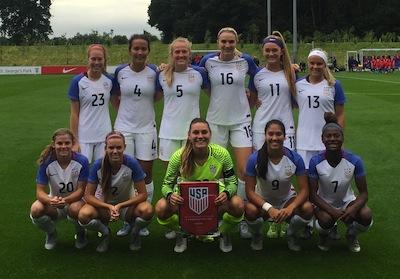 • Groundbreaking took place Sunday on the National Training and Coaching Development Center in Kansas City, Kansas. The center is a collaboration of U.S. Soccer, Sporting Kansas City and Children's Mercy to develop players, coaches, and referees of all ages. The center is set to open in November 2017 in Wyandotte County and will be home to the U.S. Soccer National Coaching Education Center for coaches and referees and the Children's Mercy Sports Medicine and Rehabilitation Center, which will offer a full range of sports medicine services for youth athletes.

• The field of 96 teams that will compete at 2016 US Youth Soccer National Championships (July 26-31) at the Toyota Soccer Center in Frisco, Texas, for titles in age groups U-13 through U-18 is set. See complete schedule HERE.