The MLS Disciplinary Committee -- the DisCo -- continues its far from satisfactory activities.

Its latest bulletin is a mixed bag. It has a positive point to make, showing that it has become aware of what the FIFA rulebook actually says, rather than what the DisCo thinks it says.

The topic is diving, always something that the tough guys at the DisCo are keen to seek out and punish. The DisCo does not call it diving, though. They use the word embellishment. Since the beginning of the season MLS players have felt the righteous wrath of the Disco and have been fined “undisclosed amounts” for embellishing. Real Salt Lake midfielder Sunny Obayan was the first embellisher, back on March 12; Montreal Impact midfielder Lucas Ontivero was the most recent, on June 25.

So the latest DisCo report includes this: “Seattle Sounders FC forward Oalex Anderson has been found guilty of simulation . . .”

I find it amazing -- and disturbing -- that the DisCo members have only now become aware that they have been using the wrong word, have actually been convicting players of a crime that does not exist.

The DisCo is a quasi-penal body. You would think it would be ultra careful in getting its terminology right. There is a difference of meaning between “embellishment” and “simulation” -- the words are not synonyms. Were the DisCo a real legal body those convictions for a crime that is not on the books would be thrown out.

Quite possibly, the guys who handed out those wrongful convictions would also be thrown out, too. Or at least laughed out. Of course, that won’t happen with the DisCo members. There are five of them and they are allowed to operate in the shadows. We don’t know who they are, and MLS is not about to tell us.

I have complained before about this secrecy. I believe that we have a right to know who these guys are, who appointed them, why they were chosen, and which way they vote.

I am not about to belittle the activities of the DisCo, nor to make light of the difficulties involved in arriving at fair judgments. Particularly in cases involving simulation. This latest example -- the first to be labeled simulation by the DisCo -- exposes the difficulties. It also exposes what looks to me like a DisCo bias -- and I’d like to know more about that.

According to the Disco, Seattle’s Oalex Anderson dived. But referee Baldomero Toledo did not give him a yellow card, and allowed play to continue. The anonymous DisCo guys are telling Toledo that he got it wrong, that he should have carded Anderson. I’m assuming they’re basing their opinion on what the TV replays show, and I’m also assuming that the replays they studied are the same ones that I have been viewing and re-viewing.

In which case, I fail to understand their opinion. Anderson has dribbled the ball past Galaxy defender Dave Romney. Romney gives chase, and at one point, just as Anderson enters the penalty area, plants his left leg clearly in front of Anderson’s left leg. Was there contact? I don’t see how there could not have been -- it would have been glancing, no doubt, but more than enough to unbalance Anderson. 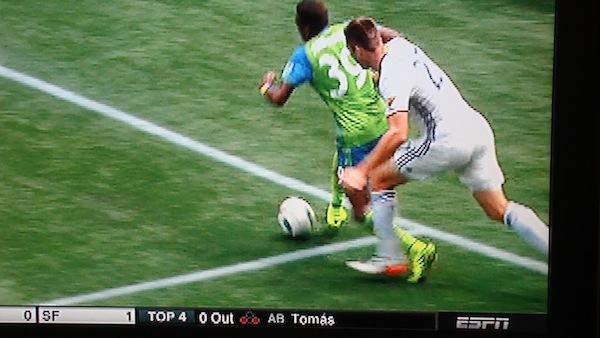 I do not feel confident enough to say that Romney tripped Anderson, though that would not be an outrageous conclusion. What is totally unacceptable to me is that the DisCo gang, looking at the same sequence, can confidently say there was no contact. A much more honest opinion from them would be that they’re not certain, and they should therefore not intervene.

So what made them give a guilty verdict based on a moment of highly questionable evidence? Evidence that does not point clearly in either direction -- either of there being a dive, or a trip. Why would they be so ready to convict Anderson?

I’d like to know, guys, whether you -- all of you -- have instructions from MLS to bear down harshly on simulation. Because that’s what it looks like. Failing that, I’d like a public assurance from MLS, and from PRO, that those bodies have no influence on DisCo decisions.

I shall, of course, not be getting that assurance. The DisCo will continue its clandestine activities, not because that’s the way things should be done, but because MLS finds it more convenient that way. In this incident, the DisCo, protected by its privacy, by the certainty that its decision will not be reversed, or even reviewed, has acted irresponsibly.