FC Dallas, which leads MLS clubs in Homegrown signings, continues to impress at the youth level. Both FC Dallas' U-15/16 and U-17/18 teams have reached the 2016 U.S. Soccer Development Academy finals, which take place on Saturday in Carson, California.

In the U-15/16 semifinal, FC Dallas defeated the Chicago Fire, 1-0, and will have a chance on Saturday to become the first repeat Development Academy national champ at the same age group. FC Dallas’ U-17/18s, whose roster is comprised of about 90 percent of the players from last season’s U-15/16 champions, beat Southern California’s Nomads, 2-1. 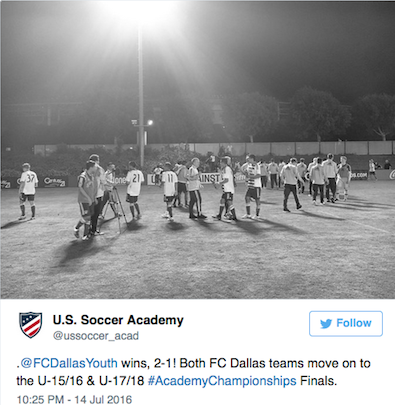 The Los Angeles Galaxy reached the U-15/16 final with a 3-0 win over Real Colorado for chance to win its second title at that age group in three years and third in six years. New Jersey’s PDA, the last non-MLS team to win a Development Academy national title, fell, 4-1, to the Vancouver Whitecaps, who are aiming to become the first Canadian DA champ, in the U-17/18 semis.