FC Dallas won 2016 U.S. Soccer Development Academy titles at the U-15/16 and U-17/18 divisions, becoming the first club to win both age groups in the same year.

The Dallas U-15/16s, coached by Luchi Gonzalez, beat the Los Angeles Galaxy, 2-0, to repeat at that age group. The U-17/18s, coached by Francisco Molina, came from behind to beat the Vancouver Whitecaps, 2-1, in overtime. 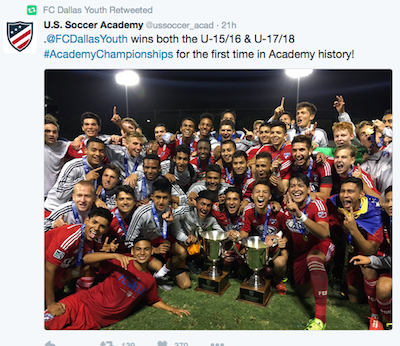 Jesus Ferreira scored his 26th goal of the 2015-16 Development Academy season in FC Dallas U-15/16 final win and also assisted on the opening goal by Aldo Quevedo, his 10th strike of the season. The 15-year-old Ferreira is the son of 2010 MLS MVP David Ferreira, the Colombian playmaker who spent five seasons with FC Dallas. Jesus, who was born in Santa Marta, Colombia, and joined FC Dallas' youth program in 2009, attended a Colombian youth national team camp last year but is in the process of getting his U.S. citizenship.

Brandon Servania, who moved from Alabama to join FC Dallas, orchestrated much of the U-15/16s' midfield play. His younger brother, Jaden, plays for FC Dallas' U-14s. Dallas-born goalkeeper Carlos Avilez, whose saves were especially crucial in FC Dallas' 1-0 semifinal win over the Chicago Fire, has spent time with the youth national team programs of both the USA and Mexico.

Ten of the players who started in the final for FC Dallas' U-17/18s were a part of last year's U-15/16 national title winning team. They included Devin Vega, who scored the opening goal and last year was the co-leading scorer along with another returnee, Giovanni Montesdeoca. Vega trained with FC Dallas' first team this season. Seven members of Molina's squad, including standout central defender Hector Montalvo, have been called into U.S. youth national camps.

"We're really proud of the boys," said Gonzalez, who also serves as FC Dallas Academy director. "Both groups showed lot of determination. We tried to focus on each group's strengths independently and their different reasons for motivation. We took an abundance of staff to make sure there was no neglect for one team or the other and so there was enough care and support and energy. And these details helped.

"Winning both titles is amazing unbelievable and sets the bar really high, but nothing changes in our office. Our day-to-day approach is to do everything we can so that our players one day end up playing in the stadium with the first team."