The Eastern Conference just got a lot more interesting, and competitive.

As soon as Orlando City fired head coach Adrian Heath, who had been with the club since its birth as Austin Aztex in 2008, speculation began about the team’s short-term and long-term prospects. Did the four-man Board of Directors overreact to a team struggling in its second MLS season, or was the board already implementing Plan B?

Evidence points to the latter, since Heath was dismissed less than two weeks ago. Jason Kreis, out of a job since being fired by New York City FC soon after the end of the 2015 season, immediately surfaced as a candidate when Heath departed. Orlando City moved swiftly, perhaps to head off interest from 2017 expansion entrant Atlanta United and other clubs with openings (Houston) or coaches rumored to be in trouble (Seattle). 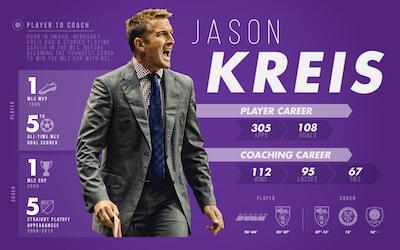 In any case, Kreis is not facing the same situations he did with Real Salt Lake in 2007 or NYCFC two years ago. RSL, which had signed him as its first player prior to starting MLS play in 2005, needed an injection of fire as well as knowledge. NYCFC, owned by the same entity -- City Football Group -- that runs Manchester City supposedly wanted an American leader for its MLS startup.

He will certainly be expected to groom and develop Orlando City’s young players, as he did at RSL, but he’s also been hired to get the Lions out of their rut -- 10 ties in 19 games -- and into the playoffs. Managing a talented, diverse squad of superstars such as Kaka and budding youngsters like Cyle Larin presents challenges as well as opportunities, and in the short term, correcting a few problems will be enough to edge OCSC high enough in the standings to nick a playoff spot.

The long run will be the more intriguing element. Regardless of whether he implements the diamond 4-4-2 formation that RSL made famous, at least in MLS, he can’t rail about being victimized as a small-market team as he did, ad infinitum, in Salt Lake City. The “us-against-them” mantra suited the team and the city. RSL played good soccer, defended well, and won.

A ballyhooed move to the Big Apple never seemed right, though a cockeyed, cramped surface at Yankee Stadium didn’t deter the fans. A few draft pieces didn’t fit, two players from the City Development System didn’t pan out, and he was hounded out of town in the wake of criticisms about veteran players that didn’t sit well with said veterans such as Frank Lampard.

It’s noteworthy that all three of his coaching assignments have been with expansion teams that otherwise have very few similarities. He transformed RSL from a straggler into one of the league’s elite teams: two MLS Cup appearances and the only run by a U.S. MLS team to the Concacaf Champions League finals. He departed NYCFC after a 10-17-7 season that left it seven points behind expansion companion Orlando City and 12 points out of a playoff spot.

Nine months later, Orlando City is still scuffling in the lower tier but NYCFC is atop the Eastern Conference. What looked to be a callous and ill-advised firing by NCFC has, so far, turned out superbly under Patrick Vieira. The Heath dismissal also raised questions, though this hiring puts a whole different spin on the matter.

The Lions are tied with D.C. United for seventh place, just one point out of the playoffs. They are hovering in the middle of the pack with 30 goals scored and closer to the bottom than the top defensively with 33 conceded. Fans are still flocking to Camping World Stadium (the average crowd of 33,892) where they have viewed an unbeaten record that isn’t all that great (three victories and seven ties).

Fans certainly can’t quibble about management’s ambitions. Maybe Heath deserved a little more time but waiting on him might have lost Kreis, whose humbling experience with NYCFC must have added some painful wisdom to his passion, experience and acumen.

He will officially take over on Monday and be accompanied by long-time assistants Miles Joseph and C.J. Brown. Interim head coach Bobby Murphy will lead the team Saturday against Columbus and take on a different role in the Kreis regime.

Despite a rough go in New York, at 43 Kreis is still one of the bright coaching minds in MLS. He’s well-steeped in the American game as a native of Omaha who played collegiately at Duke. Few remember that prior to starting his pro career with Dallas (then the Burn) in the inaugural 1996 MLS season, he slogged through three years in the USISL with Raleigh Flyers and New Orleans Riverboat Gamblers. He learned valuable lessons before ever stepping onto the big stage. Nearly a decade after he retired as a player, Kries is still sixth on the MLS all-time scoring list with 108 goals.

Team president Phil Rawlins started his American soccer ambitions with fellow Englishman Heath in Austin, and after two seasons shifted attentions to Orlando and a much more realistic path to MLS. That goal attained, he and his partners have recruited a quintessential example of American drive, determination and success.