By Mike Woitalla and Paul Kennedy

The USA may have disappointed at the 2015 U-17 World Cup last October when Coach Richie Williams' U.S. team was the first since 2001 to exit in the first round, and a 5-1 loss host Chile marked its worst loss at the U-17 World Cup in group play since falling, 4-0, to Oman in 1997. But the rate at which team's players are moving into the pros indicates this was a talented group.

This week's signing of defender Hugo Arellano, who captained the USA in Chile, by the USL's LA Galaxy II, takes to 17 the number of players on Williams' 21-player roster now with professional clubs. Arellano, who this year has been part of U.S. U-20 and U-19 national teams, becomes the 10th Galaxy academy product on Galaxy II and the 16th academy alum on LA’s MLS and USL rosters. 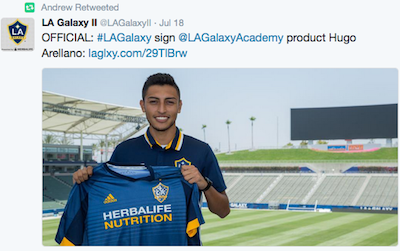 Auston Trusty graduated from the Philadelphia Union's academy program to USL second team Bethlehem Steel FC, for which he is starting as an amateur, but he plans on enrolling at North Carolina in the fall.

Hugo Arellano is the class of 11 players who comprise the first graduating class of the Los Angeles Galaxy's Blended Learning Environment program, launched in 2015 for Galaxy academy players to attend school at its training facilities at the StubHub Center. Of the graduating class, Arellano and Ethan Zubak have signed with the Galaxy's USL team, LA Galaxy II, also known as Los Dos. The other nine are headed to college ball, although the Galaxy will maintain their MLS Homegrown rights.

Three players from the FC Dallas academy program that swept the Development Academy age-group playoffs -- Hector Montalvo, Weston McKennie and Devin Vega -- were named to the U.S. under-19 men’s national team that will play at the COTIF Tournament, beginning next Tuesday in Valencia, Spain.

Coach Brad Friedel called in 22 players for the 33rd edition of the tournament, set to take place July 20-Aug. 5 in Valencia, Spain. They include four plays based on foreign clubs and three signed by MLS clubs to contracts with their USL second teams.

The USA will face Venezuela, Mauritania, Spain and Bahrain in group play. The U-19s won the Slovakia Cup in April. Ten players return from that team.

The Americans, who lost their first game to England, 1-0, got both its goals from Abigail Kim of Pacific Northwest SC. Her first was assisted by Haley Berg of Texas club Solar Chelsea. She scored the second on a breakaway. 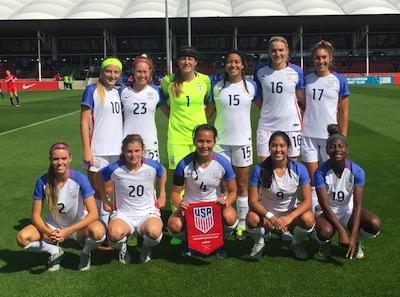 The squad, comprised of players born in 1998, is in the early stages of preparations to qualify for the 2018 U-20 Women’s World Cup in France