Refs: Use your head and wear a cap

I schedule a full check-up with my dermatologist every six months. When I was there last, this past May, she said to me, “I saw one of my patients with all this sun damage to his face. He’s a soccer referee like you. I asked him why he does not wear a cap and he said that he’s not allowed to do so. But the last time you were here, you showed me these articles (from Soccer America) that soccer refs can now wear caps.”

I told my dermatologist to give this patient my contact info and I would set him straight. For those who still don’t know, it was a year ago that U.S. Soccer announced that, as part of its “commitment to health and safety” its “medical and referee experts prepared the following recommendations for the referee community and incorporated them into our referee education materials”:

• Apply skin protection factor (SPF) of 30 or greater 15 minutes prior to being exposed to the sun.

• At a minimum, reapply every two hours or more frequently if sweating extensively.

• Take advantage of halftime to reapply.

• Periodically (once a year) review exposed skin for any changes or growths and consult your doctor or dermatologist.

• Caps may be worn so long as the cap does not endanger the safety of the official or the players.

• The cap should be consistent with the referee uniform and not conflict with the uniform colors worn by either team.

• The cap may not bear any commercial marks or logos.

I’m very proud to have gotten the ball rolling on this vital health issue for referees, who often spend full weekends in the sun, and wrote a follow-up article in Referee magazine to help spread the word. Mike Woitalla out-front plus Fox Sports’ Joe Machnik behind-the-scenes were irreplaceable in playing vital roles and U.S. Soccer President Sunil Gulati quickly understood the validity of our position.

Although it was not officially part of the ref uniform back then, I started wearing a cap around the turn of the millennium, being concerned with all the hours I was spending officiating in the sun. Yet I needed Mohs surgery on my scalp in 2013 for two forms of skin cancer, basal cell carcinoma and squamous cell carcinoma. Could you imagine what my health would be like today if I did not start wearing a cap well over a decade ago? 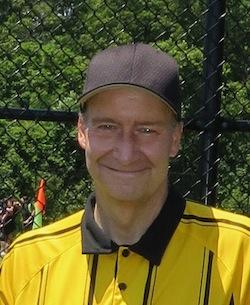 I attend a clinic nearly every month and the only time when the new recommendations were mentioned was when I was leaving one of the clinics and a ref who is a traditionalist, and was aware of my role in getting the ball rolling, expressed his displeasure with the new advice.

So I asked him how he could be against preventing skin cancer and he said that soccer refs have not worn hats for decades and it goes against the tradition of the sport. Unlike, I might add, refs in other outdoor sports who wear hats and even refs in high school and college soccer, who have been able to wear caps for decades.

Yes, my friend is right as it goes against tradition for refs to wear caps. Then again, fire escapes, smoke alarms and seat belts went against tradition when they came out and they have saved millions of lives.

But the real test came last month, the first time that I was assessed after the new recommendations came into effect last year. Now in my mid-50s, most of the serious games I have officiated are in my rear view mirror so I’m rarely assessed today. But I was assessed twice last month, on a partly sunny day, and I wore my black cap. And the assessors, citing the new recommendations, said that it looked good!