In an appetizer to the MLS all-stars’ game against Arsenal, a squad of MLS U-23 Homegrown players faced Mexico’s U-20 national team at San Jose’s Avaya Stadium on Wednesday and lost, 2-0, in the Chipotle Homegrown Game.


Mexico took the lead in the 34th minute when Luis Marquez converted a penalty kick after he was fouled by FC Dallas’ Coy Craft.

Marquez, a Chivas Guadalajara reserve team player, made it 2-0 in the 45th minute with a free kick from the wing. What looked like a cross bounced past FC Dallas goalkeeper Jesse Gonzalez.

The Homegrowns' best chance came in 74th minute when 22-year-old Raul Mendiola of the LA Galaxy slalomed through the Mexican penalty area only to sky his shot from the edge of the goal area.

Mexico, which is currently fielding a U-19 squad at the COTIF Tournament in Valencia, Spain, supplemented its squad with three 21-year-olds, including Marquez.

Also in Mexico’s squad was 16-year-old Edwin Lara, a Northern California product who played for the U.S. U-17 national team before moving to Pachuca and switching to Mexico, for which he played at the 2015 U-17 World Cup. Lara started at left back for Mexico. Abraham Romero, an 18-year-old Southern California native for played for the LA Galaxy Academy before moving to Pachuca, started in goal for Mexico. Romero started for Mexico at the 2015 U-17 World Cup. 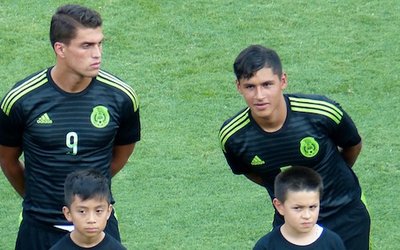 The MLS Homegrowns were coached by Landon Donovan, who selected his squad from MLS players 23 years old and younger who had come out of MLS academy teams.

Jordan Morris, the 21-year-old who has played 20 games and scored seven goals so far in his rookie year with the Seattle Sounders, entered the game in the 62nd minute.