South California clubs won a pair of US Youth Soccer national titles last weekend in both boys and girls competitions, including FC Golden State’s lifting of the McGuire Cup, the U-19 boys competition that is the nation’s oldest youth trophy, dating back to 1935. 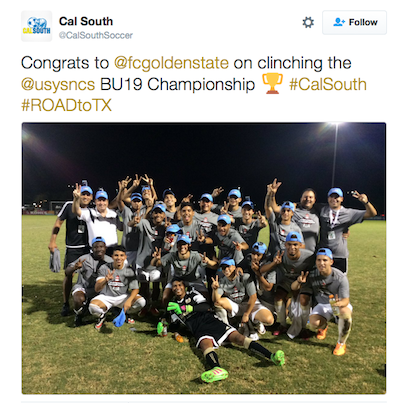 “You never really think it’s going to happen,” FC Golden State coach Robert Friedland said. “So when you actually come to realization and know the boys have worked two years in a row and done what they’ve done, there can’t be a better feeling.”

In an all-Southern California U-18 boys final, Santa Barbara SC White, coached by Rudy Ybarra, prevailed in a penalty kick shootout after a 1-1 tie with FC Golden State to win its third national title after lifting the U-15 crown in 2013 and the U-14 title in 2013.

"We are a small community and don’t have millions to choose from like the metropolitan areas," said Ybarra. "So player development and setting foundations is very important for us. Coaches don’t develop players. We set the foundation and they develop themselves through the love of the game.”

Tennessee SC 16, a runner-up at U-14s in 2012, defeated Carlsbad Elite, 3-0, in the U-18 girls final to bring the state of Tennessee its first national championship.