Bahrain eliminates U.S. U-19 men in game marred by brawl

The U.S. U-19 men's national team, after having upset host Spain, was eliminated from the Sub-20 l'Acudia COTIF tournament with a 3-1 loss to Bahrain in a game that ended with a brawl.

Coach Brad Friedel’s team entered its final Group A game, after opening with a 2-0 loss to Venezuela and 1-0 wins over Mauritania and Spain, needing a win to advance to the semifinals.

The USA took the lead over Bahrain with a goal from German-American Kevin Lankford, who plays for the U-19 team of German second division club Heidenheim. 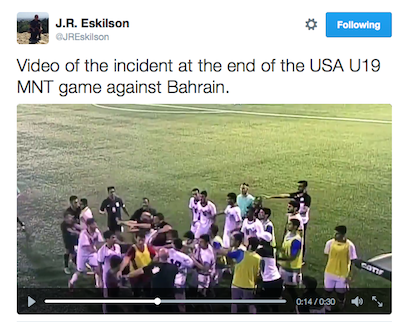 But the USA gave up three goals with 18 minutes. Shortly before the final whistle, U.S. midfielder Pierre Da Silva was fouled and while on the ground, a Bahrain player kicked the ball into Da Silva’s head, setting off a brawl that saw two players from each team ejected.

With the loss, the USA finished in fourth place in Group A while Bahrain, which had lost, 3-0, to Spain and tied Venezuela, 0-0, finished third.

In the semifinals, Spain faces Qatar and Venezuela meets Argentina.

Panama will host the 2017 U-17 Concacaf Championship April 21-May 7 to determine the region’s four qualifiers for the 2017 U-17 World Cup in India.


The U.S. U-16 girls national team, coached by Jaime Frias, is holding a 24-player training camp at the U.S. Olympic Training Center in Chula Vista, California July 31-Aug. 7.  The camp marks the second since Frias was hired as U-16 head coach and a U.S. Soccer Women’s Development Coach.

The roster consists of players born in 2000 who are in their second year of a two-year cycle before becoming U-18s with the ultimate aim of playing in the 2020 U-20 Women’s World Cup.

CSM Sport & Entertainment in new partnership with US Club Soccer
CSM, US Club Soccer’s longtime marketing and management partner, will develop and operate programming for the organization’s 500,000+ members. 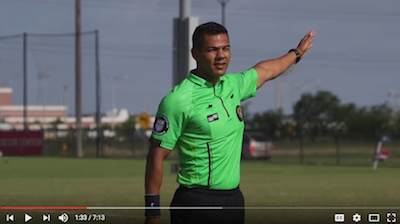