The USA outscored seven opponents 49-0 and won the Concacaf U-15 Girls Championship with a 2-0 win over Canada in the final after a 5-0 win Costa Rica in the semifinals in Orlando, Florida.

Leading Coach Mark Carr's team in scoring were Payton Linnehan and Gabrielle Robinson, with eight goals each. Linnehan, because she played fewer minutes, won the Golden Boot at the tournament that saw the USA sweep through group play with wins over Trinidad & Tobago (22-0), Mexico (1-0), Haiti (1-0) and the Dominican Republic before a 12-0 quarterfinal win over Bermuda. 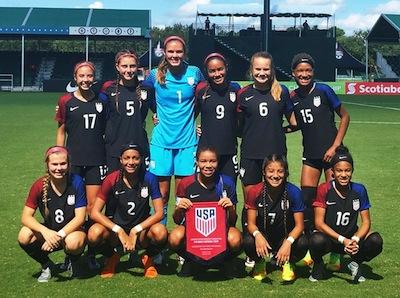 “This whole tournament experience has been incredible and taught us a lot of things about where we are as players and a team and what to expect at this level of competition,” said Carr. “This is a special group and we have thoroughly enjoyed the journey together. I am very proud of these players and I know the future is very bright in our U.S. youth national team programs.”

The USA did not compete in the first edition of the Concacaf U-15 Girls Championship, which was won two years ago by host Canada. Carr's squad will have one more event this year before transitioning to U-17s in 2017 to form the core of the team that aims to qualify for the 2018 U-17 Women’s World Cup in Uruguay.

Mexico, which won the Fair Play Award, finished third thanks to a 5-1 win over Costa Rica in the consolation game. 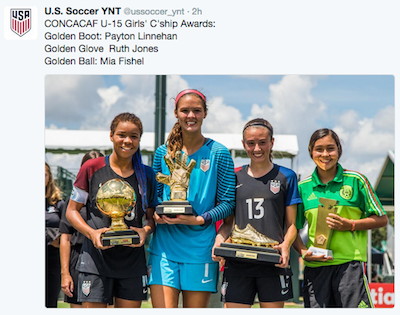 The U.S. U-18 boys national team, coached by Omid Namazi, beat host Czech Republic, 4-2, in the final of the of the Vaclav Jezek Tournament.

Namazi’s squad, which entered the tournament on a seven-game win streak, reached the final with wins over Russia (5-3), Hungary (3-1) and Slovakia (3-1). 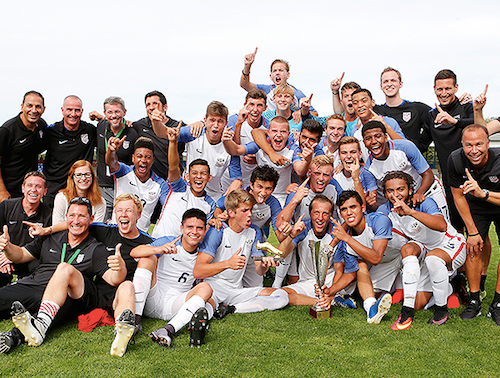 “Nick is a talent," said Namazi. "Wherever we play, I think people are in awe of his technical ability and his ability to pass defenders. Brady is a great presence in goal and has a calming influence on the whole team. He doesn’t ever seem rattled. They both deserved to get the recognition they did, but at the same time the whole team deserved recognition because everybody stepped up and had a good performance throughout the tournament.”

The U.S. U-20 women’s national team’s preparation for the 2016 U-20 World Cup in November includes the U-20 Women's NTC Invitational Sept. 14-18, at which it will play Brazil, England and South Korea at the U.S. Soccer National Training Center at StubHub Center in Carson, California.

Brazil and South Korea also qualified for the 2016 Women’s World Cup while England finished last in its European qualifying group behind Germany, Spain and Norway.

U.S. U-20 women's national team coach Michelle French will call up 21 players for the tournament and will name her roster in the coming weeks.