Los Angeles FC has signed a naming-rights deal with Banc of California for its new stadium.

The deal was announced during a ground-breaking ceremony Tuesday morning at the site that formerly housed the Los Angeles Sports Arena. Terms of the deal were not announced: Bloomberg reported that it runs for 15 years and is valued at $100 million, making it one of the biggest naming-rights deals in MLS history.

Based in the city of Irvine, Banc of California -- known as Pacific Trust until 2013 -- operates about 40 locations in the Southern California area. 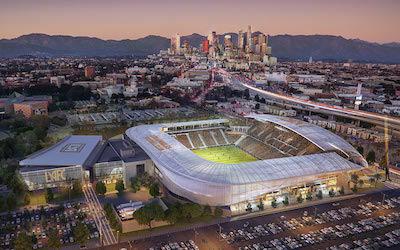 “After years of planning and hard work we are set to make history here in the heart of the city,” said LAFC lead managing owner Larry Berg in a press release. “Banc of California Stadium will allow for greater sports-viewing and live entertainment experiences to take place in Los Angeles than ever before.”

LAFC will join MLS in 2018 and is scheduled to open its first season in the 22,000-seat facility. The projected cost of the stadium project is $350 million. Along with the stadium, LAFC ownership envisions an international food hall, conference and event center, retail stores, and nightlife options.

The ownership group paid an expansion fee of $110 million in 2014 for rights to a second team in Los Angeles. The Galaxy is one of 10 original teams from the startup season of 1996.

“This world-class stadium will be a state-of-the-art venue featuring ‘state of the heart’ experience for players, fans and artists,” said LAFC executive chairman and owner Peter Guber.