FC Dallas, regarded as having MLS's best youth development program, lost out on Weston McKennie, the 2015-16 Player of the Year in the Development Academy's U-17/18 Central Conference. He became the latest U.S. youth star to head to Europe when he signed with Schalke 04 on Tuesday, two days after turning 18 and being eligible to sign. 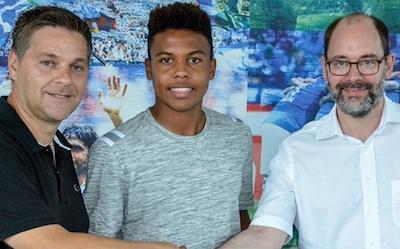 "I'm really looking forward to Germany and Schalke 04," says McKennie, who previously lived in Germany when his father was stationed there in the military. "I really want to establish as a professional in Europe. For that, I'll give everything every day. "

McKennie, who was named the top player when the U.S. U-19s won the Slovakia Cup in April, joins former U.S. U-17 star Haji Wright at Schalke's U-19s.

From the Class of 2016, Americans Kevin Coleman  (Kaiserslautern), McKinze Gaines (Wolfsburg)  and Christian Pulisic  (Borussia Dortmund) have signed with Bundesliga clubs in addition to McKennie and Wright at Schalke. Pulisic is a member of Dortmund's first team. The others are playing for their U-19s.

"He convinced us as robust and play smart player," said Schalke 04 academy director Oliver Ruhnert. "In his home country, he is one of the top players in his age group. He is also a youth international and was also captain of his team. He brings with him a lot, even in terms of mentality. We are convinced that Weston is able to play professional football. Therefore, this transfer is useful."