Which of the 120 games in seven days will you follow?

It seems like only yesterday, but it's been more than a week, that the Olympic finals wrapped up a busy summer of international soccer that included the Copa America Centenario and the European Championship. The break ends on Wednesday, the first of seven days of 120 national team games.

Here’s some help in navigating the crowded calender, which includes the beginning of European qualifying for the 2018 World Cup in Russia and two USA games wrapping up Concacaf’s semifinal round of World Cup qualifying. 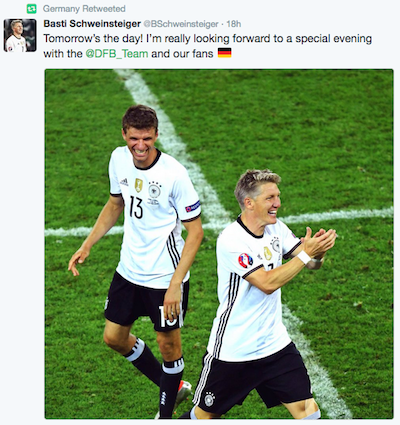 WEDNESDAY, Aug. 31
None of the 10 friendlies is particularly enticing, although ESPN Deportes and WatchESPN (2:30 p.m. ET) will air Germany’s farewell game for Bastian Schweinsteiger, a match in a Moenchengladbach against Finland.

There’s a U.S. connection to Ireland’s exhibition against Oman in Dublin as Los Angeles Galaxy striker Robbie Keane will be making his 147th and final appearance for the Irish, for which he’s scored a record 67 goals. But the game isn’t televised in the USA. WatchESPN will air at 1:10 pm ET the Czech Republic vs. Armenia, which has called up the Chicago Fire’s 21-year-old forward David Arshakyan.

THURSDAY, Sept. 1
It’s round seven of the marathon that is South American World Cup qualifying -- a two-year home-and-away round robin in which each team plays 18 games -- and features one of the world’s great rivalries: Argentina vs. Uruguay.

Lionel Messi, having called off his retirement, hopes to recover from a sore hamstring to lead third-place Argentina in the 7:20 p.m. ET kickoff (BeIN Sports and BeIN en Espanol). On the same network, at 4:50 p.m. ET, sixth-place Brazil faces second-place Ecuador, which hosts in Quito at an altitude of 9,350 feet.

Asian World Cup qualifying enters its third round, and WatchESPN will air three of the six games, including Australia-Iraq at 6:30 a.m. The Columbus Crew’s Michigan-born midfielder Justin Meram aims to make his 19th appearance for the Lions of Mesopotamia.

Thursday’s seven friendlies include a a mismatch for the ages: European champion Portugal vs. Gibraltar, a nation of 32,000 that was outscored 56-2 in 10 Euro 2016 qualifiers. Two of more intriguing the friendlies are Belgium-Spain (ESPN Deportes/WatchESPN, 2:40 p.m. ET) and Italy-France (WatchESPN, 2:45 pm ET.)

FRIDAY, Sept. 2
It’s the penultimate day of the semifinal round of Concacaf World Cup qualifying and the USA plays at St. Vincent & The Grenadines at 3:30 p.m. ET (BeIN Sports/BeIN en Espanol). Mexico has already booked its spot in the final round of qualifying, but its game against El Salvador (Telemundo, 10 p.m. ET) is its first since the 7-0 quarterfinal loss to Chile at the Copa America Centenario. Coach Juan Carlos Osorio survived the debacle but won’t be around long if El Tri doesn’t rebound emphatically.

Canada hasn’t been to a World Cup since 1986 and was knocked out the last two times by Honduras. The Canadians' hopes of reaching the final round of qualifying, the Hexagonal, for the first time since 1998, hinge on getting a result in San Pedro Sula (NBC Universo, 5 p.m. ET.)

SATURDAY, Sept. 3
A rest day for World Cup qualifying, but the field for African Cup of Nations, to be hosted by Gabon Jan. 14-Feb. 5, will be finalized this weekend with 24 games, seven of which are on Saturday.

The moment we've all been waiting for. #Kosovo in @FIFAWorldCup qualifiers. #EuropeanQualifiers pic.twitter.com/n9RjlyqAjT

MONDAY, Sept. 5
Nine European World Cup qualifying games include the start of the next chapter for Euro 2016 darling Iceland, which travels to Ukraine (Fox Sports 2, 2:45 p.m. ET) and the competitive debut of Kosovo, which plays at Finland (Fox Soccer Plus, 2:45 p.m. ET).

In May, Kosovo became the seventh national team to emerge from the 1991 breakup of Yugoslavia, four of which have qualified for World Cups: Croatia, Serbia, Slovenia and Bosnia & Herzegovina.

TUESDAY, Sept. 6
There will be World Cup qualifiers in Europe, South America, Asia and Concacaf.

If, as expected, the USA downs SVG on Friday, and Trinidad & Tobago comes away with a home win over Guatemala, the USA will need a victory over T&T to win Group C (Fox Sports 1/Univision, 8 p.m. ET) -- but second place is already enough to advance.