The USA returns to action for the first time since the Copa Centenario when it faces St. Vincent & the Grenadines on Friday in a key World Cup 2018 qualifier. For what's at stake and where to watch, plus how the USA's arrival has intensified a domestic political dispute with diplomatic implications and the Vincy Heat's U.S. pro connections.

WHERE THEY'LL PLAY?
Arnos Vale Stadium - better known as the Playing Fields is the home of the Windward Islands cricket team. The cricket ground does not have lights, so Friday's game will kick off in the afternoon.

Paul Kennedy: Depleted USMNT faces challenges in Caribbean test
Ridge Mahoney: More than a Hexagonal berth is on the line for USA

WHERE TO WATCH?
The game will air on beIN Sports, which holds Concacaf rights for qualifiers played outside of the USA and Mexico, and will kick off at 3:30 p.m. ET. 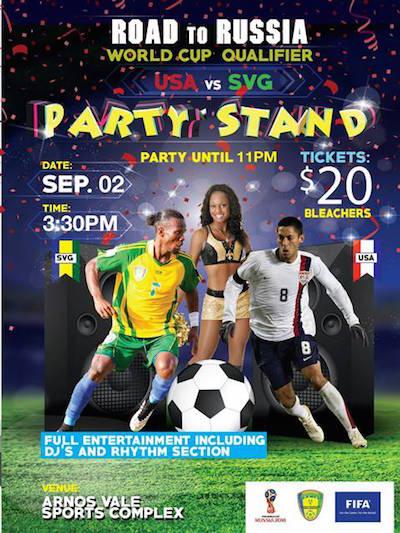 WHAT'S AT STAKE?
Trinidad & Tobago and the USA can both clinch berths in the Hexagonal on Friday, though the Soca Warriors have the easier route from Group C into the Concacaf final round. All T&T needs to do is beat or tie Guatemala at home. The USA needs to win at St. Vincent & the Grenadines and have Guatemala to lose. A U.S. win and Guatemala tie will for all intents and purposes decide the second spot. The USA would head into Day 6 with an advantage on goal difference of six goals, plus the margin of victory against SVG.

AIRPORT FIASCO HOT POLITICAL ISSUE.
Jurgen Klinsmann took 23 players to St. Vincent & the Grenadines from the U.S. camp in Jacksonville via Barbados. The team took two 19-passenger puddle jumpers to complete the journey since SVG doesn't have an international airport.

It didn't help the cause of SVG tourism that SI.com's Grant Wahl tweeted about the three-wait to get through customs.

St. Vincent has 1 person going through every bag & suitcase of every person who enters the country. 90 minutes in. pic.twitter.com/JZlNjX630K

EZRA CONNECTION.
Vincentian customs apparently didn't discriminate between locals and tourists. Myron Samuel, back from the Seattle Sounders 2, had to get the SVG soccer federation to intercede on his behalf so he could get his personal belongings through customs. They included 16 pairs of soccer shoes and pair of goalie gloves.

Oalex Anderson, who graduated from S2 to the Sounders' first team, and Samuel are the Vincy Heat's two U.S.-based pros. The connection between SVG and the Sounders: Ezra Hendrickson, the former Vincy Heat star, is the S2 head coach.

The only other pro in the Vincy Heat squad is Cornelius Stewart, who plays for Finland's PS Kemi. Gavin James plays non-league soccer in England at Slough Town.