There have been 20 World Cups but only eight champions. Which nation looks most likely to become champion No. 9?

In the last half-century, only one nation has reached the World Cup final and has never lifted the trophy: three-time runner-up Netherlands.

The Dutch finished third in 2014 but seem on the decline. They failed to qualify for Euro 2016 and their record in the last two years includes losses to Iceland (twice), Mexico, the USA, the Czech Republic and Greece.

Portugal won Euro 2016, but not impressively enough to imagine it lifting a World Cup, and Cristiano Ronaldo will be 33 come the World Cup in Russia.

The most impressive national team over the past couple of years has been Chile, winner of the 2015 Copa America and the 2016 Copa America Centenario. At the 2014, Chile opened with a 2-0 win over defending champion Spain and outplayed host Brazil in a 1-1 round of 16 game before falling on penalty kicks.

So can Chile be considered a favorite to win the 2018 World Cup?

Chile would have to be continuing to produce talent comparable to complement its core of current stars. And it must survive South American qualifying play – a two-year marathon that promises to be the most of dramatic of all the confederations with World Cup contenders.

On Thursday, in its first game since winning the Copa America Centenario, Chile fell, 2-1, at Paraguay in World Cup qualifying. 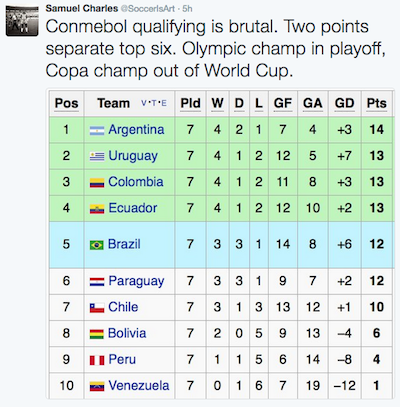 The format enables South America, with only 10 nations, to send five teams to the World Cup. But the spots are well-deserved.

Judging by proportion, South America is the most successful confederation in World Cup play.

Venezuela is the only South American team never to have qualified for the World Cup. Bolivia last qualified in 1994 and Peru hasn’t since 1982. But all of the other seven nations have qualified for at least one of the past two World Cups. Bolivia, because it hosts its game at La Paz, at an altitude of 11,900 feet, always threatens to be a spoiler.

In Europe, 54 teams are divided into nine groups – ensuring easy qualification for the traditional powers and creating a schedule with scores of lopsided matchups.

In South America, almost every matchday promises to alter the qualification zone at the top half of the standings.

On Thursday, Argentina moved into first place thanks to a Lionel Messi goal in a 1-0 win over Uruguay in Buenos Aires. Brazil moved into fifth place with a 3-0 win at Ecuador, which dropped into fourth place after a strong start that included a 2-0 win at Argentina.

Matchday 8 is on Tuesday, promising another shakeup in the standings as Chile hosts Bolivia, sixth-place Paraguay plays at second-place Uruguay – while Brazil could enter the top four with a win at home against Colombia.

With 11 games left, we’ll have plenty of opportunities to see just how strong a team Chile is.