In my 31 years as Soccer America's editor, I'd estimate I've written or edited 50,000 headlines, 20 or so a week when we were a weekly magazine, about the same number when we started the Soccer America Daily e-letter in 2001 with a reduced magazine frequency and now that number each day as most of our content is digital.

Few headlines I'd enter in the Hall of Fame of soccer headlines. One, though, stands out: "Has the USSF gone bananas?" in which  Paul Gardner reports on the U.S. Soccer Federation's 1988 AGM, celebrating its 75th anniversary in Philadelphia. 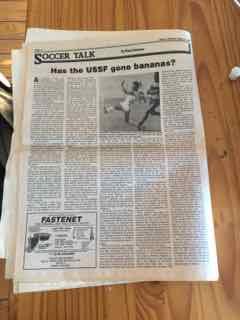 The headline had a double meaning.

The USSF had just been awarded the 1994 World Cup, but it lacked a lot things in those days. One of importance: sponsors.

What was curious at the AGM were the Chiquita bananas being handed out on trays and Chiquita signs everywhere at the nearby national youth cup finals where the legendary Union Lancers (with Richie Williams, Jim Barlow and Lino DiCuollo, coached by Manfred Schellscheidt and Bob Bradley) were running away with the McGuire Cup.

As Gardner noted, "One can, surely, assume that Chiquita is in to soccer." Again, one cannot stress how unique that was. No one else wanted to touch the sport. But the federation couldn't confirm the big news that it had gone bananas.

"Well, we didn't hear about it," Gardner wrote. "Here we have a nice, wholesome sponsor and nobody wants to tell us about it. Indeed, the abiding impression of this AGM was of its nebulousness. No one wanted to really to make any definitive statements, no one really wanted to ask any questions. A most curious and unnatural state of affairs."

Which brings up the second meaning of the headline. The federation introduced a plan for (outdoor) pro soccer at the AGM, a plan just as nebulous as the AGM, a plan no one believed would ever work.

The only reference to the specifics of the plan in Soccer America's August 11, 1988 issue was in the last item of Lynn Berling-Manuel's Short Passes.

The key question, she asked, was, "Will Americans come out in sufficient numbers as soccer spectators to support this endeavor?" This was, after all, just three years after the NASL's collapse in 1985. "I just hope," Berling-Manuel added, "no one is being sold a bill of goods ..."

If anyone was sold a bill of goods it was FIFA president Joao Havelange and his general secretary Sepp Blatter, both in Philadelphia, to help celebrate the USSF's 75th anniversary and FIFA's award of the 1994 World Cup to the USA.

Gardner's "SoccerTalk" goes through, item by item, the events of the AGM, beginning with USSF president Werner Fricker's announcement at 8:42, to be precise, that Havelange and Blatter had planes to catch so Havelange would make his introductory remarks -- supporting the unopposed Fricker's re-election -- and then the USSF's Development Plan would be "showcased for FIFA's eyes and ears."

Fricker called for the adoption of rule changes to the structure of professional soccer, and Scott LeTellier, the architect of the plan, explained the plan, "tinting the whole thing with an elusive vagueness," according to Gardner. "LeTellier asked and answered his own questions. Is the document complete? No. Is this the final concept? No. When will it begin to operate? No one has a crystal ball, but certainly not tomorrow."

As Gardner noted, the plan -- 23 pages of the AGM book -- contained some radical ideas, "some highly questionable ideas," and nobody had anything to say about it. The plan was approved by overwhelming voice vote.

Gardner said it looked like railroading to him. "I know, from talking to delegates, that there was considerable skepticism, about the workability of the promotion and relegation proposals, to take just one point," he wrote before going on question other topics in the report: foreign player limits and -- a favorite Gardner topic -- mandates that coaches have "A" licenses. "But not a peep was heard," he added.

The last order of business before Havelange and Blatter departed was the election of officers: Fricker as president, Hank Des Bordes as vice president and Paul Stiehl as treasurer.

"The show was over," Gardner noted. "The FIFA men rose, shook a lot of hands, and departed."

And that was the last we heard about the Development Plan. For all I know, it was tossed in a trash bin on Havelange and Blatter's way out the door, along with all the bananas laying around.