Aiming to end Pay to Play and Play to Win

The USA with 2,802 medals in the Olympics surpasses all of its major competitors by a wide margin; nobody dares to question the overall sports dominance of the USA. The NFL, NBA, MLB and NHL are the best leagues in their respective sports in the world; there is no argument about that either.

The development of soccer starts at the lowest level possible. The reigning soccer countries went through a serious restructuring of their systems and harvested the results in 10-12 years. Germany is the best example; its reengineering project started in early 2000s and they won the World Cup in 2014.

Now U.S. Soccer has just taken what I think is the most radical and reformist step -- including the setting up the Developmental Academy -- toward that end. U.S. Soccer's Player Development Initiatives have just been updated. Through these initiatives, the structure of the U6-U12 age group will be overhauled. You must start from the very bottom to restructure any system in order to succeed, and that is what U.S. Soccer has done. 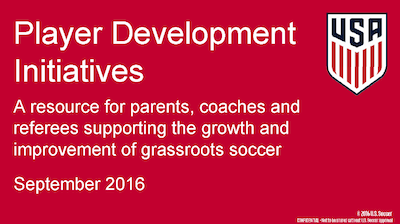 U6-U12 youth development program is neither an elite nor a recreational development program. It embraces all kids of all talent levels. In these age groups, the kids enjoy and have fun with the game while developing their individual skills. From the age of 6 to 12, kids learn to pass over short and medium range, receiving with the feet and chest, basic passing combinations, shooting and defending in pairs and threes. That is it. Nothing more, nothing less. This is the universal guide to youth development in soccer.

There is no emphasis on team play and there should be no emphasis on winning. They can do that at U13 and above. Basically for those age group kids, they should have fun and “having fun” should be the primary objective for the clubs and the coaches.

Before the initiatives, there were no national standards for U6-U12. The initiatives define for each age group the new birth-year registration (Jan. 1 to Dec. 31), the modified Rules of the Game for small-sided games, the minimal certification required for coaches and the player development philosophy. For each age group, the first statement of the developmental philosophy is “results and standings should not be recorded.” Naturally, they will win and lose games and will be jubilant or heartbroken depending on the result, but the motto should always be “win or lose enjoy the game."

Like any radical change, this change will hurt people, whether they are players, parents, coaches or club officials. So the changes should be communicated well by U.S. Soccer and internalized by the stakeholders.

As the preface to the initiative says: “Players need to be put in the best possible environment to succeed; there are no short cuts; success requires a long-term approach and commitment and there is a need to educate and empower parents and coaches.

Lately, I have seen an article in Baltimore Sun titled “New age rules 'wreaking havoc' in youth soccer.” It is a strong title and reaction to the changes mandated by the birth-year initiative. Naturally, there is concern among parents that their kids will not be able to train and play with their teammates once the new age limits are imposed. True -- but the kids will find new teammates and enjoy playing the game in a few weeks. By the way, the new age guidelines -- birth-year registration -- is in accordance with the rest of the world.

I understand the feelings of the kids and to some extent their parents’. What I do not understand is the reaction of the coaches and club officials. The article talks about an U9 team that claims to be one of the best in the state. Sorry! What! “The best in the state”! Based on what ranking and why is this so important? Pardon me, we are talking about 8-year-old kids who are trying to enjoy the game or should I say should be enjoying the game. 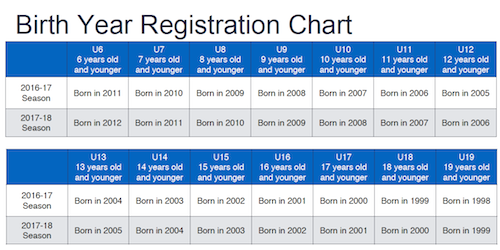 The coaches and the executives are worried that the teams will be broken up. So what? At those age groups based on universal development standards, you are not supposed to build up teams or focus on winning; at those age groups you should develop individual player skills while the kids enjoy the game. Some parents might say “we do not care about universal development standards,” but U.S. Soccer does care and should.

Although there are scholarship systems in some youth clubs for the financially underprivileged kids, they are inadequate. For example, talented but financially disadvantaged Hispanic inner-city kids do not have the same chance to develop their skills as their white middle-class counterparts. Some of the parents of U6-U12 pay-to-play system kids might not care too much for the development of their kids’ individual soccer skills. They pay for them to play, so they want their kids to be happy. They feel and think that their kids will be happy if they win. Most of the time the parents are happier than the kids, when they win a game.

Since they pay for their kids to play, they like to hire coaches who train and tune their kids to win; similarly such clubs are managed by executives who share the same philosophy. Otherwise why would they be so worried about teams breaking up?

The kids will find new friends very fast with their new age group and enjoy the game. It is the parents, the coaches and the executives who are crying foul, since they realized what the new philosophy will bring: Play to enjoy not play to win. Hopefully, the new initiative in the long term will change the pay-to-play system and play-to-win philosophy for the kids. That day will be the birthday of the new U.S. player development system and the road to the global success for the very talented American soccer players.

(Ahmet Guvener is the former Secretary General and the Technical Director of Turkish soccer federation [TFF]. He was also the Head of Refereeing for the TFF. He served as a member of the FIFA Panel of Referee Instructors and UEFA Referee Convention. He now lives and works as a soccer consultant in Austin, Texas.)