The Trailblazers: When Caligiuri played against Klinsmann

Watching Christian Pulisic break through with Borussia Dortmund reminded me of the time Paul Caligiuri played against Jurgen Klinsmann.

To be exact, the excitement of seeing an American-bred player on the European stage recalled the time when U.S. players first ventured abroad -- and how delighted we were to see them play pro ball. Sometimes against world-class players.

It was a much different time in American soccer, when the USA qualified for the 1990 World Cup but didn’t have a bona fide professional league. Before Italia ’90, Paul Caligiuri went to Germany and after that World Cup John Harkes went to England and Tab Ramos to Spain.

Caligiuri played on the Hansa Rostock team that in 1991 won East Germany’s last league and cup title, before reunification merged the DDR-Oberliga with the Bundesliga.

In the Bundesliga, Caligiuri played for FC St. Pauli, which in the 1995 lost, 1-0, to Bayern Munich. Klinsmann, the current U.S. national team coach vs. the man whose goal against Trinidad & Tobago qualified the USA for the World Cup for the first in 40 years.

Caligiuri is difficult to spot in this video, but he’s running near the penalty spot when Klinsmann scored: 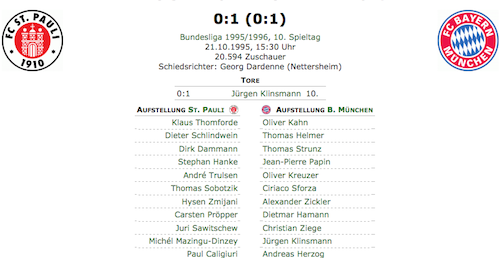 It wasn’t easy to see them in action when Americans first started going abroad. We needed a satellite dish -- they were 10 times bigger then -- to have DeutscheWelle TV and see Wynalda scoring for Saarbruecken in 1992.

Somehow, we managed to access, thanks to the big dish, the Canadian network TSN, which showed lots of English highlights and gave us glimpses of Harkes at Sheffield Wednesday.

I remember needing pay-per-view to watch the Scottish Cup final that Claudio Reyna won with Glasgow Rangers in 2000. It was easier to see him in action when he moved to the English Premier League. Here’s a couple goals he scored for Sunderland, before he moved to Manchester City.

It’s a great time to be an American soccer fan. You can watch talented U.S. players every week in MLS -- the veterans you know well and young ones who might be the next stars.

But there’s something especially exciting about seeing a young American perform in the UEFA Champions League. The same as it would be for fans in any country outside the European soccer power nations.

After Pulisic’s impressive performance against Legia Warsaw on Wednesday, there’s an increased chance that the teenager will play against Cristiano Ronaldo’s Real Madrid, which Dortmund meets in the Champions League, Sept. 27 and Dec. 7.

And if he plays, it will be a lot easier to watch the action than it was when Americans first started playing in Europe.