Soccer's birth date is widely considered to be Dec. 8, 1863, when the English FA published its first set of rules -- after a heated debate on whether players should be allowed to kick each other as well as the ball.

Those who believed that “kicking out at the opponent, that is the real football,” lost the argument and it was declared that, “neither tripping nor hacking shall be allowed.”

There was not, as far as the records show, any concern about using the head -- the part of the body that contains the brain -- to strike the ball.

But a century and a half later, there is serious concern about heading, because science and technology have revealed so much about the dangers and frequency of concussions.

It’s not just a matter of concussions being a byproduct of the heading -- head-to-head or elbow-to-head clashes -- but also the possibility that the accumulation of sub-concussive impacts, e.g., head-to-ball, could be harmful. Children are probably especially susceptible.

As we await the results of further studies, U.S. Soccer took sensible action last year by banning heading at under-11 and limiting it at U-12 and U-13.

I’ve already hailed the regulations as beneficial, regardless of the health concerns, because I believe booting high balls at young ages is detrimental to long-term player development. Controlling high balls instead of heading them increases the likelihood of a team keeping possession, and putting children into more situations in which they have to settle high balls hones an important skill.

To the detractors of the new heading regulations who claim children need to learn how to head early on to become good at it, I’ve responded that introducing it when their neck muscles are stronger makes it more likely for them to develop good technique.

An incremental introduction to heading -- including softer, light-weight balls, neck-strengthening exercises, heading games in a controlled environment -- is excellently demonstrated in a new on-line course from the National Soccer Coaches Association of America (NSCAA). 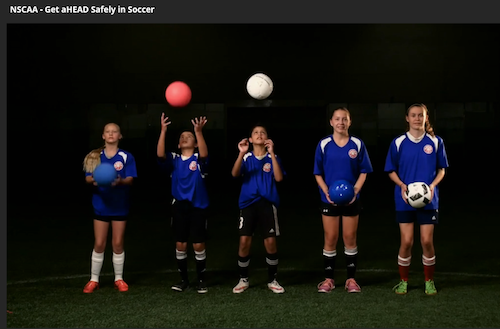 The 30-minute “Get aHEAD Safely in Soccer” course is free, whether you’re an NSCAA member or not. It’s another demonstration of how effective online education can be.

Watching a short video clip of children demonstrating an exercise has always been so much easier for me to translate into a successful practice on the field than interpreting Xs and Os on a book page. 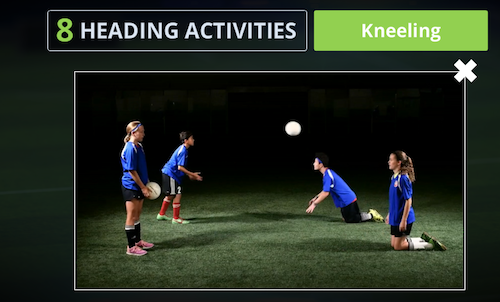 For however much I have gleaned from attending “clinics," I so much appreciate a well-produced web site course, with clear graphics, concise narration, video demonstrations, the ability to rewind and review -- then take a short test at the end to ensure one didn’t miss important information. (Other examples are U.S. Soccer’s F license course and the U.S. Club Soccer coaching registration prerequisite "Coaches Guide to Youth Soccer Injury Recognition).

I’d imagine most youth coaches would agree with me, because with all the time we spend driving to practices and games, on top of our day jobs, to get valuable information via the IPad or computer -- is so much more convenient than making another trip to the field, or a gym or classroom. There’s also the downloadable info to file for easy access before a practice.

I am sometimes wary of coaching education, because it can aggrandize the role of the coaches, when their job at the younger ages should be to allow the children to learn from the game and to explore it on their own terms, to simulate the pickup game environment that encourages creativity and improvisation. Nowadays a conversation about youth soccer includes words like “academy” and “curriculum” -- and too many children arrive at a soccer field for the first time expecting to play, but have to do “drills.”

But when it comes to heading, coaches must take an active role, which does require education -- made wonderfully convenient with the NSCAA’s “Get aHEAD Safely in Soccer.”