The word is out.

Atlanta United FC has confirmed that Gerardo Martino has been hired as the MLS expansion team’s first head coach. The team has scheduled a news conference for Wednesday in Atlanta. 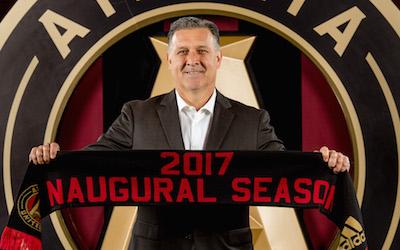 “I’m very happy to join Atlanta United as the first head coach in club history,” Martino said in a statement released by the team. “This is an exciting time for MLS and I’m looking forward to the challenge of leading a team in an evolving league. Atlanta United is a first-rate organization, and I’m very eager to get working and build one of the top clubs in MLS.”

The native of Rosario, Argentina, played 16 seasons (1980-1996) as a midfielder mostly for Newell’s Old Boys and started his coaching career in 1998. He won Paraguayan league titles with Libertad and Cerro Porteno, and guided Paraguay to the 2011 Copa America final, which it lost to Uruguay.

After one season (2012-13) back home with Newell’s, he went to Barcelona, which finished second to Atletico Madrid and lost the 2014 Copa del Rey final to Real Madrid. He accepted the Argentina job in August, 2014. He cited disputes with the Argentina soccer federation (AFA) as the reason for stepping down last July.

“Everybody’s going to speak about Argentina and Barcelona, right?’, said technical director Carlos Bocanegra in an interview with Sirius XM. “What I liked and what we liked was him transforming Newell’s, a team that was in a relegation battle down there in Argentina, eventually winning the second half of the season and reaching the semifinal of the Copa Libertadores. He took a Paraguayan national team in 2007 and put them on the right path.

“We’ve had a lot of discussions about players we’ve already signed and players that we are looking at, what type of style we wanted to play, the differences in the leagues whether it’s in Spain, in Argentina, here in MLS, the national teams. He’s open-minded, he’s willing to learn and wanting to learn about the American system even more, and he brings with him his global experience.”

Bocanegra also said that Martino strongly supports player development and would attend academy training sessions Tuesday evening. Atlanta United U-18 and U-16 teams started play this month in the U.S. Soccer Development Academy. The club has signed and loaned out seven first-team players.

Argentine outlets reported last week that Martino was in negotiations with Atlanta United, which starts play in MLS next year. The club is owned by Arthur Blank, who founded the Home Depot home-improvement chain and owns the NFL Falcons, which will share the new Mercedes-Benz Stadium in downtown Atlanta with the soccer team.

“This is an incredibly exciting and historic day for our club,” said Blank in a statement. “Gerardo brings an unprecedented level of international experience to our head coaching position that will be a valuable asset to our players and demonstrates the continuing growth of Major League Soccer. We’re thrilled he’s chosen to join our club and look forward to welcoming him to Atlanta.”

The press conference presenting Martino will be streamed live on mlssoccer.com Wednesday starting at 10 a.m. Eastern.