The names in scoring summary for Tuesday's Borussia Dortmund-Real Madrid game include Cristiano Ronaldo, Gareth Bale, a World Cup winner, an African Player of the Year -- and an 18-year-old American.


Ronaldo opened the scoring of the Group F Champions League game after receiving a back-heel pass from Bale. Host Dortmund equalized in the 43rd minute with a tap-in from Pierre-Emerick Aubameyang, the French-born Gabon international who won the 2015 African Player of the Year award and was last season's Bundesliga Players Union Player of the Year after scoring 25 goals.

A pair of Frenchmen, Raphael Varane and Karim Benzema, teamed up to give Real Madrid a 2-1 lead in the 68th minute.

Within a minute, Pulisic delivered a cross that Varane cleared. His second cross, in the 76nd minute, was blocked.

In the 83rd minute, Pulisic broke through for a shot on goal saved by Real’s Costa Rican keeper Keylor Navas, a 2014 World Cup Golden Glove finalist.

In the 87th minute, Pulisic dodged a tackle by Brazilian Danilo and sent a cross through the penalty area that Andre Schuerrle hammered high into the net to earn Dortmund a tie with the defending UEFA Champions League champ.

Schuerrle, who set up Mario Goetze’s goal in Germany’s 1-0 win over Argentina in the 2014 World Cup final, became the first German to score Champions League goals for four teams, having previously struck for VfL Wolfsburg, Chelsea and Bayer Leverkusen.

For Pulisic, it was his second Champions League appearance after becoming Dortmund’s youngest player to start in the competition when he dazzled in its 6-0 Group F opening win over Legia Warsaw Sept. 14.

It’s only been seven months since the kid from Pennsylvania made his first-team debut for Dortmund.

“It was an amazing game to come into, especially because the level was so high and it was such an intense game,” Pulisic said in Tuesday’s postgame interview. “I was so excited to get in there and show what I could do and help the team.” 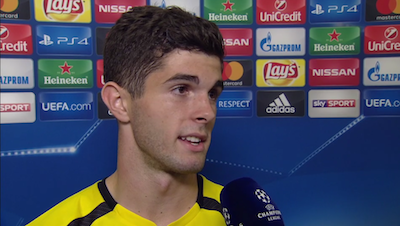 Asked to explain what it’s like to play in the Champions League, a competition launched in 1955 as the European Cup that now represents club soccer’s biggest stage, Pulisic said:

“There's no better feeling. Playing in the Champions league is a whole other sense of pride. It's amazing. I always watched it as a kid and then coming on in such a big game -- it's incredible. I can't describe it.”

Needless to say, every Real player is a national team player. Same goes for Dortmund, which besides its Germans and Gabon’s Aubameyang, includes internationals from Switzerland, Poland and Raphael Guerreiro (Euro 2016 winner Raphael Guerreiro)

So rich in talent is Dortmund that even Schuerrle started on the bench, coming on in the 58th minute for Goetze. The third Dortmund sub, 19-year-old Emre Mor, played for Turkey at Euro 2016.