The 2016 U-17 Women’s World Cup kicks off on Friday in Jordan, marking the first time a Middle East nation has hosted a female soccer world championship.

For the USA, which opens against Paraguay on Saturday, the U-17 World Cup is the only female world championship it has yet to win.

The current team is coached by former UCLA coach B.J. Snow, who in 2013 became the first full-time coach for the U.S. U-17s.

Snow’s first team outscored its qualifying foes 26-1 but fell to Mexico on penalty kicks in the semifinals to miss the 2014 U-17 World Cup. The squad included Mallory Pugh, now a regular with the full national team who played in last summer’s Olympics.

“That team was a really talented group that has shown to be special as they make up a majority of the U-20 national team now and have players like Mal Pugh,” said Snow. “I think the difference between that cycle and this cycle is we had five months of preparation (before 2013), whereas this cycle we’ve had two years of preparation.”

In qualifying for Jordan, the USA outscored its five foes, 18-2, and won the Concacaf Championship with a 2-1 final win over Mexico. Ashley Sanchez (So Cal Blues) and Frankie Tagliaferri (PDA) led the USA in scoring with five goals, followed by Civana Kuhlmann (Colorado Rush) with four. Sanchez and defender Kiara Pickett also played for the U.S. U-20s in their successful qualifying campaign for the 2016 U-20 World Cup. 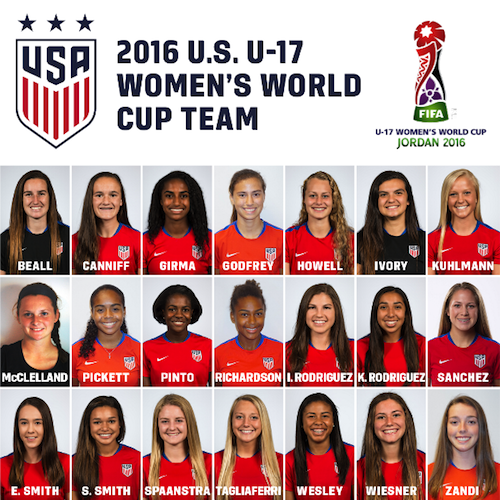 • Eight U.S. players from California (six from Southern, two from Northern); three players from Colorado and two each from Michigan, Florida and New Jersey; and once each from North Carolina, Minnesota, Pennsylvania, Virginia.

• The top two finishers from the four groups of four teams qualify for the quarterfinals. 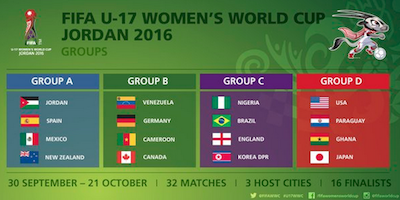