Rebuffed for years in its efforts to build a home stadium, New York City FC is projecting its training facility could be ready in 18 months. 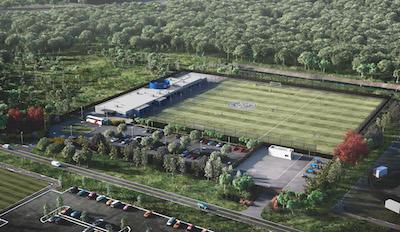 The team announced Wednesday its purchase of 17 acres of land in Orangeburg, N.Y., 25 miles north of midtown Manhattan. The proposed 25,000-square-foot complex will house team offices, locker rooms, medical services, a gym, a cafeteria, and other amenities, and a grass surface covering one and half times the area of a regulation soccer field.

NYCFC did not disclose what it paid for the land and has not put a cost on what it will spend on the project.

“New York City FC is proud to announce a new, permanent training facility for our first team in Orangeburg,” said team vice-chairman Marty Edelman in a statement. “Although we are still a young club, today marks an important milestone in our long term growth.”

"The location is fantastic, close to New York City, close to Yankee Stadium where we play," said director of football operations Claudio Reyna to The Journal News. “This will be a first-class facility that will have everything we need to prepare for the season. This will be our permanent home. It's a big step in the evolution of our soccer club.”

The facility is scheduled to open prior to the start of the 2018 season. NYCFC trains at SUNY Purchase College in Westchester County. The club withdrew from a proposed arrangement with Manhattanville College when local residents opposed it.

The Orangeburg Planning Board approved the proposal in July after the club agreed to help pay for access and infrastructure upgrades.