What was the value of the USA's bumpy win in Cuba?

The USA's 2-0 win in a friendly over Cuba on Friday marked its first return to the island since September of 2008, when the USA beat the Cubans, 1-0, in a semifinal round qualifying game for the 2010 World Cup.

Two players who played in the 2007 game, in which Clint Dempsey scored the deciding goal, played on Friday: midfielders Michael Bradley and Sacha Kljestan.

Friday’s game also took place at the Pedro Marrero Stadium, with no indication of improvements to the bumpy playing field that might even get complaints from Sunday league players.

“Obviously, both teams had to play with the field conditions,” said Landon Donovan after the 2008 game, “but it wasn’t a flat surface. Even if you hit a good pass, it can bounce on you.”

After Friday’s game, U.S. coach Jurgen Klinsmann said, “It was a tremendous experience, but at the end of the day, the field was a field that was not playable.”

Back in 2008, the USA had to play in Cuba. Friday’s game was by choice, but the options were few for Klinsmann’s team as it prepares for the start of the final round of 2018 Word Cup qualifying, against Mexico Nov. 11 and at Costa Rica Nov. 15. With South American and European teams playing World Cup qualifiers this weekend, that left weaker Concacaf teams, like Cuba, whose quest to reach the 2018 World Cup ended by coming up short a two-game series with Curacao. 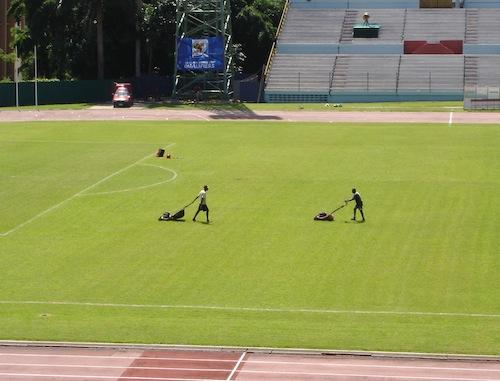 Before the game, Klinsmann said, “We are always looking forward for our group to have different experiences, and this is a unique opportunity.”

He told his players to explore Havana: “You have to combine, both on and off the field. … Sometimes it’s not only about the [soccer] side for developing players, but also off the field, too. ... Some players even went to a school class, surprisingly, and were part of a classroom.”

As for what happened on the field, the Cubans frustrated the Americans until Chris Wondolowski smacked home the rebound of a Julian Green shot in the 62nd minute. Nine minutes later Green finished a pass from Wondolowski to make it 2-0.

The Americans survived the bad field without injuries. Defender Steve Birnbaum suffered a bloody cut to the head, but that was the result of a high kick by Duzney Espinoza.

“It wasn’t ideal,” said Wondolowski of the grass. “It’s part of the game. Two teams have to play on that. You have to take it for it is and at halftime we made some adjustments, a little more direct and we didn’t want to make silly passes in the middle where you could lose it and get counterattacked on.”

Playing in less than ideal conditions isn’t a bad way to prepare for the 10 games -- half of which will be on foreign turf -- that will determine whether the USA reaches the 2018 World Cup. And for however crude some of the play may have been, Klinsmann got another chance to give experience to his younger players.

Green, remember, is also only 21 years old and has gone through tough times since scoring for the USA at the 2014 World Cup at age 19. Unable to break into Bayern Munich’s starting lineup, he was able to prove worthy of remaining in Klinsmann’s consideration with his performance against Cuba.

Against Cuba, Yedlin earned his 41st cap and Brooks his 27th.

For the USA to succeed at the 2018 World Cup, it will need a good balance of older veterans and experienced younger players.

Friday’s game may not have been easy on the eyes for the viewers at home, but eight of the players Klinsmann fielded were 23 years old or younger. The Cuba trip didn't just give the players a chance to check out a fascinating city like Havana, it also indicated that this U.S. team in the midst of the crucial process of integrating a younger generation.

jurgen klinsmann, men's national team
7 comments about "What was the value of the USA's bumpy win in Cuba?".
Read more comments >
Next story loading