Out of the postseason picture in 2014 and 2015, the Western New York Flash took the NWSL by storm in 2016, completing a thrilling postseason run with a dramatic win over the Washington Spirit to capture the title.

The Spirit was seconds away from winning in overtime when league MVP Lynn Williams scored to even the score at 2-2 and send the game to a shootout.

The title was the fourth in four different leagues for the Flash, which also won titles in the W-League (2010), WPS (2012) and WPSL Elite (2012) before joining the NWSL in 2013. The Flash reached the final with a team that included Abby Wambach and Carli Lloyd.

Credit goes to technical director Charlie Naomi for drafting young talent and first-year coach Paul Riley, a veteran of women's pro soccer going back to the WPS, for building a championship team that included six second-year pros and one rookie.

The breakout star is Williams, who assisted on Samantha Mewis' goal and scored on a header off a pass from Jessica McDonald in the 124th minute as the Flash twice recovered from goals by Crystal Dunn, who matched his regular-season total in final.

"We gutted it out," said Riley, who was suspended for the final. "We played a lot in practice being down by one goal with five minutes to go, humping the ball forward, and putting people in the box, and just hoping something happens in the box. I think we just crossed that ball. It felt like three and a half minutes before Lynn got on the end. "

Canadian keeper Sabrina D'Angelo, a third-round pick in the 2015 NWSL College that also produced four Flash starters taken in the first round, was the hero in the shootout with saves on shots by Ali Krieger, Tori Huster and Diana Matheson. The save on Matheson's shot came after Sam Mewis -- another of the second-year stars -- missed a chance to win the shootout when Spirit keeper Kelsey Wys stopped her shot.

"The team did so well to equalize the game," he said. "It was my job to save the day. It's just a gut feeling. As soon as Lynn scored I knew we were going to win in PKs. Just the confidence and the sureness that I was going to save. And it's funny, one of the players said, Taylor [Smith] said, "You're going to save three of them." It's just the way it worked out." 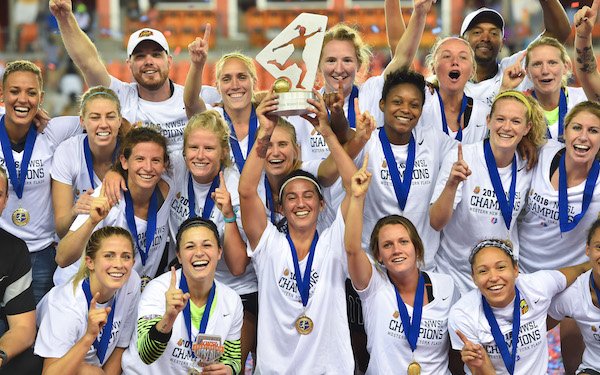 The overtime final was the third in two weeks in the NWSL postseason. Both semifinals went to overtime. The Flash beat the Portland Thorns, the Shield winners, before more than 20,000 fans on the road. The difference was Flash went ahead both in regulation and overtime, 2-0 and then 4-2 before winning 4-3.

"It's been a whirlwind of a year, of the last two weeks," said Williams, who scored 11 goals in the regular season  I feel like I've worked really, really hard for this moment -- not just me but this entire team. We keep talking about it's our story and we get to write it. In the middle of the season we were a little shaky and I know people wrote us off until this exact game. I don't know if anyone expected us to win. We were like 'You know what, we're in this final, we get to write our story.' We did. It's just amazing."