Christian Pulisic  started and went the full 90 for Borussia Dortmund in a 2-1 UEFA Champions League win at Portugal’s Sporting that kept Dortmund atop of Group F after three games.

The win, which at the halfway mark of group play, is crucial to Dortmund’s chances of advancing. Dortmund is tied on seven points with Real Madrid, which it tied 2-2 on Sept. 27, in first place but Dortmund has a superior goal difference -- plus-7 to Real Madrid’s plus-5. 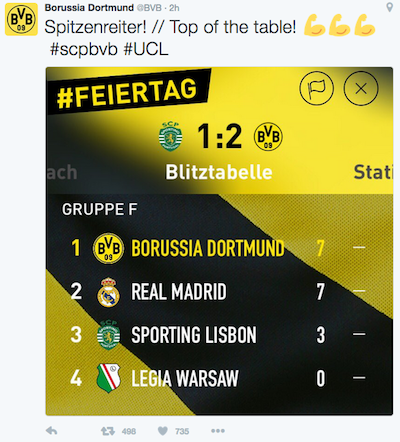 Pierre-Emerick Aubameyang and Julian Weigl scored for Dortmund in the first half and survived Sporting’s second-half surge after Bruno Cesar’s free-kick goal in the 60th minute.

In its next UCL game, Dortmund hosts Sporting, which has three points, on Nov. 2. The top two finishers advance to the knockout stage and a win clinch for Dortmund.

Another 18-year-old U.S. player, Cameron Carter-Vickers, was on Tottenham’s bench for its scoreless tie at Bayer Leverkusen.