In the space of a week, the Portland Timbers, the 2015 MLS champions, failed to reach the 2016 playoffs and were eliminated from the Scotiabank Concacaf Champions League. The nightmare week got worst Monday night when Timbers captain Liam Ridgewell and starting goalkeeper Jake Gleeson  were both arrested on charges of driving under the influence of intoxicants. 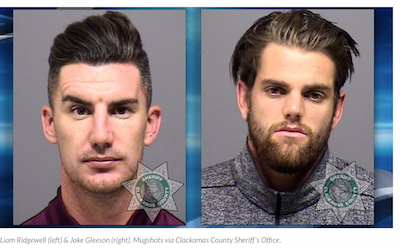 How could two players be booked for DUII?

KATU reported that Gleeson crashed his BMW and called Ridgewell to pick him up. The airbags in Gleeson's BMW deployed, so an alert that the airbags have been deployed went to authorities.

Lake Oswego police arrived at the crash, field sobriety tests were conducted, and Ridgewell and Gleeson were found to be intoxicated. Neither took a breath test, but both were booked into Clackamas County jail. The Oregonian reported that Gleeson was also charged with reckless endangering and reckless driving. Both posted $7,500 bail.

The incident came less than a day after a 4-1 loss at Vancouver eliminated the Timbers from the MLS playoffs. Four days earlier, Portland tied Saprissa of Costa Rica, 1-1, at home. The Timbers needed a win to overtake Saprissa and advance to the CCL final eight.

As per other incidents involving players charged with impaired driving, Ridgewell and Gleeson were ordered to undergo an assessment by MLS's Substance Abuse and Behavioral Health Program and will not be eligible to participate in any competition until the assessment is complete. That includes an evaluation by Substance Abuse and Behavioral Health Program doctors and an MLS investigation.

Ridgewell has spent the last two offseasons playing on loan in England. Gleeson plays for New Zealand, which plays New Caledonia in a two-game World Cup 2018 qualifying series in November.

The Timbers issued a statement on Tuesday:

"All members of the Portland Timbers organization have a responsibility to this community and are expected to represent the club and city the right way. Players and staff are held accountable for their actions, and this matter will be handled appropriately. This is a serious matter, and we are disappointed in the events that resulted in these charges."

Gleeson joined the Timbers' U23s in 2010, on the eve of the MLS launch, and finally won the starting job in goal in 2016 when Ghanaian international Adam Kwarasey was first injured and then returned to his native Norway.

"I am profoundly sorry that I let down a community that has graciously supported not only me, but my teammates as well," said Gleeson in a statement. "I take full responsibility for my behavior and will do whatever is necessary to regain the trust of the Timbers organization, the fans and Major League Soccer."

Ridgewell's arrest came almost two months after he signed a two-year contract extension. Injuries limited him to 22 games in 2016 and he missed the Vancouver game because of yellow-card accumulation.

Through his attorney, he issued a statement of apology, saying he understood he was a role model and looked forward "to earning back the trust of the community."

Gleeson holds a green card, while Ridgewell, who joined the Timbers from England's West Bromwich Albion in 2014, is one of seven Timbers who have work visas.

John Henry Hingson III, an Oregon criminal lawyer specializing in drunk driving defenses, told the Oregonian that he did not expect the case would impact the players' visas.

The arrests were the second and third of the year in the Portland area involving a soccer player.

In April, retired women's superstar Abby Wambach was arrested on a DUI charge in Portland when she failed a field sobriety test and later a breath test at Portland's Central Precinct after being pulled over for failing to stop for a red light. She said she was leaving a dinner at a friend's house when she was stopped.

Wambach pleaded guilty to the misdemeanor charge of driving under the influence of intoxicants (DUII) in Multnomah County (Oregon) Circuit Court and she later said her arrest was a wakeup call to her substance abuse problems.