After employing two Scotsmen and an American as head coaches, the Dynamo has gone Colombian.

The club confirmed Friday it has hired former Chivas USA coach Wilmer Cabrera to replace interim head coach Wade Barrett, who compiled a 4-7-11 record after replacing Owen Coyle in late May. Barrett, informed Thursday he would not be continuing as head coach, has been offered a position within the organization. 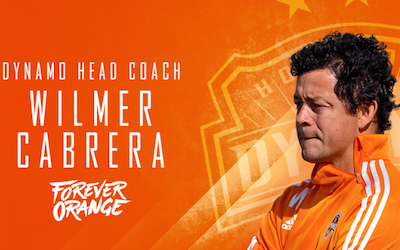 Cabrera, a former Colombian international who accrued 48 caps, served as a head coach this past USL season with the Dynamo’s affiliate, Rio Grande Valley FC, which finished second in the Western Conference. Houston had hired him after he spent a year working on developmental programs around the world administered by FIFA. Previous to that job he was an assistant coach to Oscar Pareja, now head coach of FC Dallas, on the Colorado Rapids staff and worked one year as head coach of Chivas USA, which MLS dissolved after the 2014 season.

“I think what stands out with Wilmer is that he has worked at every level of soccer in North America,” said sporting director Matt Jordan during a press conference announcing the hire. “That’s a unique skillset that not a lot of coaches in this country have. I think in addition, what’s unique about Wilmer is that he played the game at the highest level, but he really came to this country for a fresh start.

“It’s not very often that you see someone that played at such a high level that has that level of humility to start your coaching career in a country that you’ve never been in and to establish yourself. I think that shows the character, the determination and it shows the true value that a coach like Wilmer brings to the table.”

Unlike Pareja, who ended his playing career in MLS, Cabrera finished up in 2005 with the Long Island Rough Riders, and worked briefly as a junior college and club coach before taking over the U.S. U-17 team in 2007. Extensive experience in player development and familiarity with the organization were cited by Jordan and team president Chris Canetti as vital factors in the hiring decision.

“We’ve all talked about what a great resume Wilmer has, but it was very important that he’s been part of our organization over the last 10-11 months and to get to understand who he is as a coach and what he represents and what his beliefs and philosophies and core principles are,” said Canetti. ”By being able to work with someone so closely for this amount of time, it was a real opportunity to show that those things aligned very closely with what we are trying to do. I think having him inside the organization for this time was a great advantage to us.”

Cabrera, 49, takes over a team that has foundered badly since Kinnear left after the 2014 season to coach San Jose. Houston hasn’t reached the playoffs since 2013 and last week ended up last in the Western Conference with a 7-14-13 record and 34 points, only three more than the league’s overall doormat, Chicago.

Pareja praised the hiring, as did another of their former teammates on the Colombian national team – Carlos Valderrama. “Congratulations to Wilmer for being named head coach of the Houston Dynamo,” said Valderrama in a team press release. "I wish him the best. We’ve known each other since our time together on the Colombian National Team. He is prepared, hard-working, disciplined, and a good person.”

Said Cabrera, "I understand the responsibility to be the head coach for a big club like Houston Dynamo with big history, with a big fan base. I am here because I am well prepared to do it."