The build-out line: A wonderful idea that needs an 'into play' tweak

Now I do not ref as many small-sided games as 11 v. 11 games being played on a larger field. But in the small-sided games I’ve officiated, I have seen a growing number of teams use the goalkeeper punt as an offensive weapon, rather than retaining possession. With small-sided games, it’s relatively easy for a goalkeeper, particularly those who are U-11 or U-12, to punt the ball well into the other half of the field -- and too many teams are doing this rather than concentrating on retaining possession and moving toward the opposing team's goal that way.

So for U-9 and U-10 games, I really like the build-out line, placed equidistant between the penalty area line and the halfway line, and the fact that keepers can no longer punt or drop-kick the ball. A punt or drop-kick results in an indirect kick to the opposing team. I wish that prohibiting punting and drop-kicking would be extended to all small-sided games. 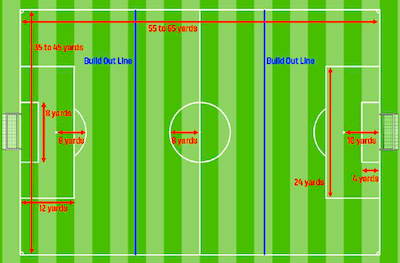 The Player Development Initiatives directive from U.S. Soccer states that the opposing team can cross the build-out line after the ball is put “into play.”

If you take that directive literally, generally not a good thing to do with young kids, the ball is in play after a goal kick when it goes outside the penalty area and during the run of play it’s in play when the goalkeeper releases the ball. The differentiation is confusing, particularly to a little kid. So I’ve had to help guide the young players in telling them when they could cross the build-out line during play.

Enforcing the rule this way, the keeper would have to roll the ball to a teammate standing a few yards away or a goal kick would be played to a teammate just outside the penalty area to avoid immediate pressure from opponents. A keeper throwing the ball 10 yards or more to a teammate, even rolling the ball to the side of the field, would not result in “the build-out line promotes playing the ball out of the back in a less pressured setting” as the opponents could be right there when the keeper’s teammate receives the ball.

I believe that only after the keeper’s teammate touches the ball, the opposing players should then be allowed to cross the build-out line as enforcing the rule this way is in the spirit of what U.S. Soccer is trying to do. In the first couple of games that I officiated with build-out lines, where there was a lack of clarity in my mind exactly how “into play” should be enforced, I did this and it worked out well with the goalkeeper’s teammate having approximately 2-3 seconds before an opponent challenged the ball. Teams were able to play the ball out of the back and this interpretation creates what U.S. Soccer seeks, a “less pressured setting.”

The directive from U.S. Soccer states that “when the goalkeeper has the ball … the opposing team must move behind the build-out line until the ball is put into play.” But the keeper can distribute the ball quickly, accepting the fact that opponents can then challenge for the ball.

I like the fact that the build-out line, and not the halfway line, is used to denote offside violations so an attacker cannot be penalized for offside between the halfway line and the build-out line. This reminds me of the 35-yard line used in the original North American Soccer League. For our purposes today with little kids, it makes sense to enforce offside over a smaller portion of the field while still not allowing an attacker to hang out by the opposing team’s goalkeeper.

I also like that scores are not being kept by leagues in U-10 games and below. Despite this, there remain some adults, either coaches or simply parents, whose kids are just getting started with youth soccer who are sadly, shall we say, overly exuberant about winning?

Yet a nice by-product of the Player Development Initiatives changes is the games can be a bit easier to ref. U-12 games are small-sided rather than 11 vs. 11 so fewer players to watch on the field. The U-9 and U-10 games with the build-out line will have fewer offside decisions as offside can only be whistled in a smaller area.

Summarizing, the concept of playing the ball out of the back in a “less pressured setting” is wonderful but the execution is not as good as the rules do not facilitate this in some cases, so the build-out lines are definitely a work in process. U.S. Soccer needs not take my word for it but can simply watch games to see what is happening. I believe they need to make an adjustment in the rules before the build-out lines and the other Player Development Initiatives become mandatory in August 2017.

(Randy Vogt has officiated over 9,000 games during the past three decades, from professional matches in front of thousands to 6-year-olds being cheered on by very enthusiastic parents. In his book, Preventive Officiating, he shares his wisdom gleaned from thousands of games and hundreds of clinics to help referees not only survive but thrive on the soccer field. You can visit the book’s website at PreventiveOfficiating.com)