Study reveals new information on heading's impact on the brain

U.S. Soccer may soon no longer be the world's only federation that implements bans and limitations on heading at the youngest ages.

David Little, the chief executive of the Scottish Youth Football Association (SYFA),  said it would publish new heading guidelines "as soon as possible."

Little’s statement came in the wake of a study from Scotland’s University of Stirling, published in EBioMedicine, that identified “small but significant changes in brain function immediately after routine heading practice.”

The research entailed players ages 19 to 25 heading the ball 20 times from a machine designed to replicate the power and pace of a corner kick. The players were tested before and after the sessions on brain function and memory.

After just one session, memory-test performance was reduced up to 67 percent, but returned to normal within 24 hours.

The researchers concluded: “Although the magnitude of the acute changes observed was small, it is the presence of the effect that is of interest. This measure was previously shown to be altered in confirmed concussion, but the acute changes in corticomotor inhibition, accompanied by cognitive changes, following the sub-concussive impact of football heading raise concerns that this practice, routine in soccer, may affect brain health. …

“Although these changes in brain function were transient, these effects may signal direct consequences of routine soccer heading on (long-term) brain health which requires further study.”

Last year, U.S. Soccer rewrote the rules for youth soccer to take heading out of games and for U-11 and under and it implemented a limit on heading in practice at U-12 and U-13: a maximum of 30 minutes per week with no more that 15-20 headers per player, per week.

"What we need to know is what happens when that normal balance is disrupted over and over again as you do in weekly heading drills. Do the effects add up? Does the balance get disturbed permanently?” Magdalena Ietswaart, a cognitive neuroscientist and one of the authors of the report University of Stirling report, told the New York Times.

She added: “Our study does show that you probably should not head the ball the day before an exam. The brain is not really firing on all cylinders.”

U.S. U-16 boys finish French tourney with loss to host

The U.S. U-16 boys national team, coached by Coach Shaun Tsakiris, lost to host France, 2-0, to finish the Val-de-Marne Tournament with one win and two losses.

After opening with a 2-1 over England thanks to a pair of goals from the L.A. Galaxy academy’s Ulysses Llanez, the USA fell, 3-0 to Russia. The win over England marked the third meeting between the teams. In February, they tied, 1-1, and England won, 4-2.

Tsakiris’ team will compete at the IMG Cup Dec. 11-19 in Bradenton, Fla. 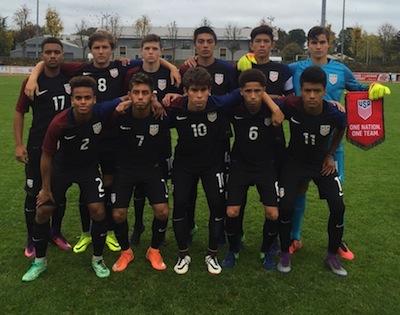 Coach John Hackworth has named a 22-player U.S. U-17 boys national team squad for a Oct. 30-Nov. 9 training camp in Kingston, Jamaica, where the USA will face Jamaica Nov. 2 and on Nov. 6.

Dos Santos, who was born to a Cape Verdean father and Portuguese mother, played three years with the Union academy before joining Benfica's academy program.

Following the Jamaica trip, the U-17s will prepare for the 2016 Nike International Friendlies in in Lakewood Ranch, Fla. (Nov. 30-Dec. 4), at which the USA faces Portugal, Turkey and Brazil. The Concacaf qualifying tournament for the 2017 U-17 World Cup in India takes place in Panama April 21-May 7.

The National Soccer Coaches Association of America (NSCAA) and Soccer America have partnered on a research project on compensation for coaches across various levels of the U.S. game, beginning with a 5-minute online survey for NSCAA members. The survey will gather information on coaching and coaching-related activities. The results will help better equip coaches to negotiate salaries and benefits packages. Results of the research will be published on SoccerAmerica.com and the NSCAA’s Soccer Journal. Members of the NSCAA, the world’s largest coaches organization, can take the 5-minute survey at the following links: