Back to Barcelona and returned from Ajax: Tale of two U.S. teen stars

The desire of American youngsters to join foreign clubs and their courtship of U.S. teens have steadily increased over the years -- even before the success of Pennsylvanian Christian Pulisic, who debuted for Borussia Dortmund in the Bundesliga at age 17.

But there’s a major roadblock. FIFA prohibits clubs from signing players from other countries under the age of 18. Unless it’s within in the European Union (EU), where the age is 16. Or if they live within 30 miles of the border. Or if the parents also moved, but not for soccer reasons.

Pulisic circumvented Article 19 by acquiring an EU passport, for which he was eligible thanks to his Croatia-born grandfather. (Christian's father also moved to Germany with him and works for Dortmund as a youth coach.)

FIFA calls it Article 19 “Protection of Minors” -- but it’s a “hard cases make bad law” kind of regulation. FIFA instituted it in reaction to what was described as human trafficking in soccer. The cases came mainly from African and South American children who were promised stardom in Europe but, in the extreme cases, ended up living in squalor in faraway foreign countries away from their families.

The unintended consequences of FIFA’s Article 19 were demonstrated starkly when Californian Ben Lederman, who joined Barcelona’s academy at age 11, was banned from playing competitive games with Barca when FIFA found the club guilty of violating Article 19 with 10 players. Lederman left Spain at age 15 and joined U.S. Soccer's Bradenton Residency Program.

Barcelona didn’t exploit Lederman, whose parents moved to Spain with him. But the Ledermans admitted in a New York Times article that their move was for soccer reasons. By the letter of the rule, Ben’s move to Barcelona violated Article 19.

Applying “Protection of Minors” to a family like the Ledermans is of course absurd. Imagine a rule that you couldn’t send your child to study abroad. What if you thought the best violin training was in Italy but someone told you weren’t allowed to bring your kid there? Even if you joined her. 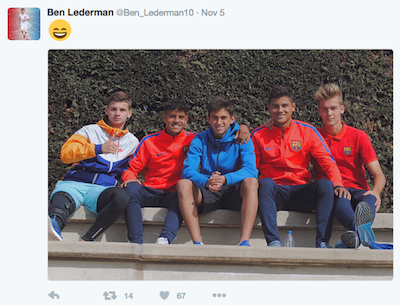 On Sunday, Spanish web site Mundo Deportivo reported the appearance of Ben, now 16, at Barcelona’s training center. ESPNFC’s Jeff Carlisle reported that Lederman had acquired a Polish (EU) passport and will be eligible to return to competitive play with Barcelona’s youth teams on Jan. 1.

But another Southern California teen star lost his appeal to Court of Arbitration for Sport to remain in Europe, with Ajax Amsterdam. The 15-year-old John "Xuxuh" Hilton, out of Chivas USA academy, moved to the Netherlands with his family in 2015. 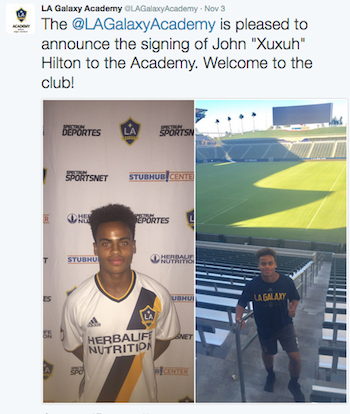 Hilton has joined the Los Angeles Galaxy academy, where he’ll be reunited with Coach Brian Kleiban, who moved to the Galaxy after Chivas USA folded, reports Will Parchman at TopDrawer.com.

The Galaxy has an ambitious youth academy, which includes high school at the training center and a reserve team in the USL.

And there’s still no proof that venturing abroad as a teen is a better path to stardom for young Americans than remaining in the USA through the teen years.

In fact, most of the U.S. products who succeeded in European leagues left after age 18. Players from Claudio Reyna and Brian McBride to Clint Dempsey, Tim Howard, Michael Bradley, Sacha Kljestan, DeAndre Yedlin outnumber those like John O’Brien and Pulisic.

And now we have clubs such as the Los Angeles Galaxy and FC Dallas that provide a professionalized soccer environment while keeping children with their families in their communities.

It would not be a case study -- nothing to draw conclusions from -- but it will be interesting to see what level of players Lederman and Hilton are in a few years from now.