Will the third time be a charm for the U.S. women’s national team program in 2016?

After the USA exited last summer's Olympics in Brazil in the quarterfinals, ending a streak of three straight gold medals, the USA was eliminated in group play of the U-17 Women’s World Cup in Jordan. Now it’s the U.S. U-20 women’s turn, at the U-20 Women’s World Cup (Nov. 13-Dec. 3) in Papua New Guinea -- and for two players the tourney will mark their second world championship of the year.

The 18-year-old Mallory Pugh played three games and scored once at the Olympics. The Colorado product played in the 2014 U-20 World Cup, at which the USA fell in the quarterfinals on PKs to North Korea, and is age eligible for the 2018 U-20 World Cup. Ashley Sanchez, 17, captained the U-17s in Jordan, where she scored three goals. Sanchez, the youngest player on Coach Michelle French’s roster, scored three goals, including the championship gamewinner, and had five assists at the Concacaf U-20 qualifying tournament.

The USA opens against France on Monday before facing Ghana and New Zealand in Group C.

Of the USA's first-round opponents, only France has reached the semifinals, finishing third in 2014 and fourth in 2008. Ghana has qualified for the last three U-20 World Cups and failed to reach the knockout stage. New Zealand reached the quarterfinals of the 2014 tournament after exiting in the first round of its previous four appearances. 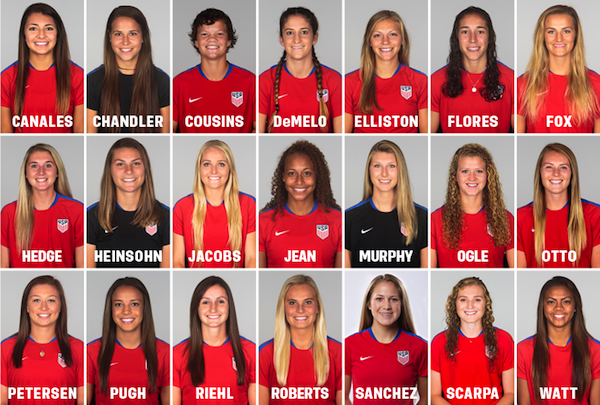