Stalemate start for USA at U-20 Women's World Cup

The USA, facing what is likely its strongest Group C opponent, opened the U-20 Women's World Cup in Papua New Guinea by tying France, 0-0.

Mallory Pugh had the best U.S. chances, after dribbling from midfield, in the 31st and 62nd minutes. But her shot on the first chance went to France keeper Mylene Chavas -- her only save of the game -- while Pugh’s second shot went high.

The French outshot Coach Michelle French’s team, 17-3 while U.S. keeper Casey Murphy was credited with four saves during the game in which France had 60 percent of the possession. 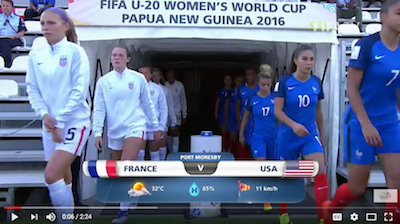 In its second Group C game (Thursday, 4 am ET, FS1, NBC Universo), the USA faces New Zealand, which opened with a 1-0 win over Ghana.

"What an absolutely incredibly athletic team France is," said French. "They gave us all that we could handle and then some. They have personality players, they can take on and they can serve. With that being said, I could not be more impressed with the effort, grit, and the attitude of our team to compete. At the end of the day, we had a couple of opportunities to win so it was a great first game of our group."

Mexico opened its U-20 Women's World Cup campaign with a 2-0 win over South Korea. As was the case when Mexico beat Honduras, 2-0, in the third-place game of the U-20 Concacaf Championship to clinch a spot at World Cup, its goals were scored by Southern Californians Kiana Palacios and Jacqueline Crowther.

Palacios, a junior at UC Irvine, played her youth ball with Slammers FC. Crowther, of Legends FC, is a sophomore at Baylor. In total, nine players on Mexico's 21-player roster represent U.S. colleges or youth teams. Crowther's goal was set up by another Mexican-American, Maria Sanchez of American Falls, Idaho. Mexico's starting goalkeeper Emily Alvarado is a freshman at TCU out Texas Rush. 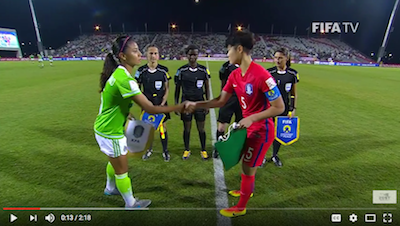 The group will play two intra-squad games on Nov. 16 and three games against U.S. Soccer Development Academy clubs -- vs. Strikers FC, LA Galaxy and Real So Cal -- on Nov. 19.