The most intriguing coach in soccer: Hoffenheim's Julian Nagelsmann

Hoffenheim, one of only three undefeated teams in the Bundesliga, is coached by Julian Nagelsmann, who is the same age as his team's leading scorer. He took the helm in February at age 28 with Hoffenheim in second-to-last place.

Hoffenheim was seven points deep in the relegation zone when it promoted Nagelsmann from youth coach to replace Dutchman Huub Stevens. The team had won two of its first 20 games in the 2015-16 season when Nagelsmann took over. It won seven of its last 14 games as Nagelsmann guided it to safety, finishing above relegated Eintracht Frankfurt, VfB Stuttgart and Hannover 96.

This season, Hoffenheim is undefeated with five wins and five ties, the last draw coming against league leader Bayern Munich before the international break.

After 24 games with Nagelsmann at the helm, Hoffenheim has picked up 43 points, bettered only in the Bundesliga during that period by Bayern Munich (59) und Borussia Dortmund (51). Hoffenheim is currently in third place, four points behind Bayern.

Hoffenheim also has the Bundesliga’s youngest roster, including eight players from its own academy, some of which Nagelsmann coached when at age 26 he guided Hoffenheim to the A-Junioren (U-19) national championship.

By no means had Nagelsmann planned it this way. His aim was to be a professional player, but a knee injury ended the defender’s career at FC Augsburg at age 20 before he played a first-team game. (Before joining Augsburg, he was a teammate on 1860 Munich’s youth teams with U.S. national team player Fabian Johnson.)

"At first, I didn't want anything more to do with soccer," said Nagelsmann. "It was very sad for me that I had to end my career so young."

Nagelsmann, with his playing career over, studied business administration but switched to sports science -- then returned to Augsburg, where reserve team coach Thomas Tuchel, now the boss at Borussia Dortmund, enlisted Nagelsmann to scout opponents.

"That was my way into coaching," said Nagelsmann, who joined Hoffenheim as a youth coach in 2012. "I learned a lot from him."

Nagelsmann’s view on what makes a successful coach:

“In coaching, 30 percent is tactics, 70 percent social competence,” he said. “Every player is motivated by different things and needs to be addressed accordingly.”

Hoffenheim midfielder Kevin Vogt said, “It's fun to work with him. He makes the players better.”

Nagelsmann is also known for his calm demeanor.

"I do not yell at my players because they made a mistake or rage in the locker room," Nagelsmann said.

When Hoffenheim appointed Nagelsmann head coach, some of the German media called it a publicity stunt. But his players were quickly convinced.

"Julian is a down-to-earth type,” said 21-year-old defender Niklas Süle. “And when you as a player have an honest coach, you know where you stand. Julian speaks everything out in the open. He doesn’t do things in a roundabout way. Whether you’re a regular starter or a reserve, he’s straight-up with you.

“He brings everyone on board and every player feels important.” 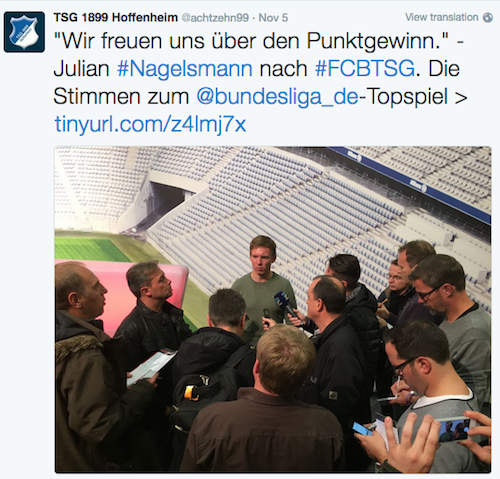 It had been unheard for someone in his 20s to get a head-coaching job at pro club in a major league in any country. The coach, it seems, had to be significantly older than his players.

Clubs consider it safer to hire older, experienced coaches no matter how many times they’ve been fired, than to trust a younger coach. Hoffenheim, instead, hired a guy who wasn’t even an approved coach by the German federation (DFB) standards. The appointment of Nagelsmann was OKed on the condition that he complete the DFB senior coaching license, which he did while saving Hoffenheim from relegation.

So without experience coaching pros, without the proper license, and far younger than coaches who usually get hired, Nagelsmann was given an opportunity and can already be considered a success -- as he saved Hoffenheim from relegation last season.

Aspiring younger coaches face the Catch-22 of not getting hired because they don’t have enough experience, which they would only get if they got hired.

The Nagelsmann story should change the approach clubs take when hiring coaches. Age and experience might be over-rated.