The USA did not receive a single yellow card in its three Group C games at the U-20 Women’s World Cup in Papua New Guinea, which is why Coach Michelle French's team will face Mexico in the quarterfinals on Friday instead of defending champion Germany.

After opening with a scoreless tie with France and beating New Zealand, 3-1, the USA finished group play by tying Ghana, 1-1. The result left the USA and France, which beat New Zealand, 2-0, in its final game, tied on points (5), goal difference (+2), goals scored (4) and head-to-head. Thus, to determine first and second place, the fifth tiebreaker, Fair Play was used. France received one yellow card; the USA zero. 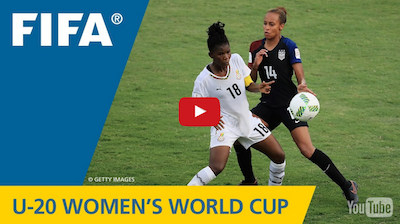 Against Ghana, the USA fell behind in the 20th minute when Abambila Ernestina’s 40-yard shot bounced from the crossbar off the back of goalkeeper Casey Murphy’s hands into the net.

But the USA equalized two minutes later with captain Mallory Pugh’s second goal of the tournament. After receiving pass from Katie Cousins on the left flank, Pugh evaded two Ghana defenders and stroked home from 20 yards into the lower corner of the Ghana goal.

Ghana outshot the USA 14-8 but did not force a save from Murphy. Ghana committed 19 fouls to the USA’s nine and had three players cautioned.

• In Mexico's 3-2 win over Venezuela, Kiana Palacios, a junior at UC Irvine who played her youth ball with Slammers FC, scored in the 4th and 10th minutes to give her three goals so far.

• In the other quarterfinals on Thursday, North Korea faces Spain and Japan meets Brazil. The winner of USA-Mexico faces the North Korea-Spain winner in the semifinals.