Bruce Arena is a safe bet compared to the gamble U.S. Soccer took on Klinsmann

It was an exciting and hopeful time, when U.S. Soccer hired Jurgen Klinsmann in the summer of 2011. The press conference at Niketown in New York City garnered media attention not seen for an American soccer announcement since MLS signed David Beckham in 2007.

Now, the USA would be led by a man who as a player won a World Cup and a European Championship with Germany. Making him an even more intriguing candidate to lead the USA, Klinsmann had moved to California, with his American wife, after retiring in 1998, and had thoroughly educated himself on the U.S. game. Already fluent in Italian, French and English -- during his playing days he vacationed in the USA -- he learned Spanish, the language of a vital community in American soccer. He got involved in the adidas ESP Camp, a player development showcase for America's top teens.

Upon his retirement, Klinsmann said he was in no rush to enter the coaching ranks, but he got his German federation (DFB) license, part of which entailed attending practices at the Los Angeles Galaxy with then-head coach Sigi Schmid. He also hooked up with Bruce Arena, who welcomed him to observe U.S. national team training camp.

After a Gold Cup final loss to Mexico in the summer of 2011, the Federation fired Bradley and hired Klinsmann, who had now had a second stint as a coach, lasting less than a season at Bayern Munich

The failure at Bayern, the Bundesliga’s richest, most talent-laden team, could have been a red flag. Also, the third-place finish on home soil at the World Cup was somewhat overrated. Four years earlier, under Coach Rudi Voeller, Germany finished runner-up in Japan. Voeller, too, had taken over a team in crisis, eliminated from the previous European Championship in the first round.

Nevertheless, it was easy to be impressed with Klinsmann during the 2006 World Cup. He always had an inspiring, optimistic demeanor. Combine that with his experience as a player and his ambitious work to familiarize himself with every facet of American soccer -- it looked like a reasonable gamble for U.S. Soccer to give Klinsmann the helm of the U.S. national team.

Klinsmann certainly seemed like a smart enough guy to learn from his failure at Bayern and worldly enough to navigate the unique challenges he’d face as a USA coach.

But Klinsmann’s team showed no signs -- after two, three, four, five years -- of playing more impressive soccer than the U.S. national team had under his predecessors, dating back to Steve Sampson and Bora Milutinovic. So now the Federation is cutting its losses and the task at hand is crystal clear: qualify for the 2018 World Cup while rejuvenating a team that in its last game, a 4-0 loss to Costa Rica, looked uninspired and unmotivated. 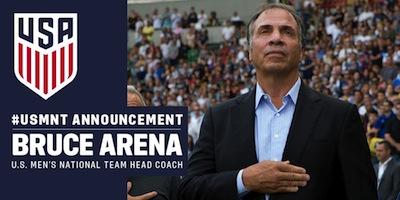 The firing of Klinsmann was made easier by the availability of Bruce Arena, by far the USA’s most successful coach ever. Before his first stint as U.S. head coach, 1998-2006, Arena had won five NCAA titles with the University of Virginia -- an especially significant achievement considering the attractive, sophisticated and attack-minded style of soccer the Cavaliers played -- two MLS titles, a U.S. Open Cup, a Concacaf Champions Cup and an Interamerican Cup with D.C. United.

Arena, whose D.C. United teams also played an entertaining brand of soccer, did double-duty coaching the USA’s U-23 national team at the 1996 Olympics, where the USA fell to eventual silver medalist Argentina but beat Tunisia and tied Portugal.

After he took the helm of the national team, Arena guided the USA to two wins over Germany and victory over Argentina. He won two Gold Cups, finished runner-up at a Confederations Cup, qualified the USA for two World Cups and his team’s 2002 World Cup performance was its best in the modern era of U.S. soccer.

After the USA’s first-round elimination at the 2006 World Cup, Arena was replaced by Bradley. Nine months after parting ways with the Red Bulls, Arena was hired to coach the LA Galaxy in August 2008. During nine seasons, Arena led the Galaxy to four MLS Cups and won three.

“I’ve had 10 years on the field at the club level,” Arena said. “I’ve had the opportunity to work with some of the most talented players in the world, and understanding how they work. I’ve continued to grow on the tactical side. … Ten years later I’m better prepared for this job than I was in 1998, 2002, and ultimately 2006. … One of the things you learn from experience is you see things a lot clearer, a lot quicker.”

After opening with the losses to Mexico and Costa Rica, USA is in last place in the Hexagonal, the final round of qualifying for the 2018 World Cup, but with eight more games to play, beginning with a home game against Honduras March 24. Before then, Arena will have a January training camp.

There was no Niketown, standing-room-only press conference filled with international journalists upon Arena’s appointment on Tuesday. It was a media conference call during which Gulati said the 65-year-old Arena has a contract through the 2018 World Cup.

“I’m thrilled to be back with the national team,” Arena said. “It’s the greatest honor for a coach in our country. We have a great challenge ahead but we have a great pool of players to reach our goal of qualifying for Russia in 2018.

“I have a lot of confidence in our domestic pool and players playing in Europe and Mexico. Since I left in 2006, the pool of players has certainly expanded.”

Never in the history of U.S. Soccer has a coach with so many championships on his resume and so much experience with American players taken charge of the national team. It’s a safe bet that Arena will steer the USA back on track.