Two years ago in Canada, the U-20 Women’s World Cup ended in disappointment when Coach Michelle French's team fell to North Korea on a penalty-kick tiebreaker after a 1-1 tie in the quarterfinals.

French’s team has already fared better at this year’s U-20 World Cup in Papua New Guinea, having beaten Mexico, 2-1, in the quarterfinals following a first-place finish in Group C thanks to ties with France (0-0) and Ghana (1-1) and a 3-1 win over New Zealand.

Germany, the only other three time-winner in the previous seven of editions of the biennial U-20 World Cup, fell, 1-0, to France in the quarterfinals. North Korea, which won the title in 2006, finished runner-up in 2008 and fourth in 2014, beat Spain, 3-2, in the semis.

The USA and North Korea also met at the 2012 U-20 World Cup, the USA winning, 2-1, in the quarterfinals en route to lifting the title under Coach Steve Swanson. And the USA, under Coach Tony DiCicco, beat North Korea in the 2008 final, 2-1, on goals by Syndey Leroux and Alex Morgan.

Last month, North Korea won the U-17 Women’s World Cup with a penalty-kick tiebreaker win in the final against Japan, which eliminated the USA in group play.

"They [North Korea] are another completely different team to what we have faced,” said French. “They are really good defensively, really good in wide areas, lethal in set plays. We know the success they have had, and how much better they have got as a nation.” 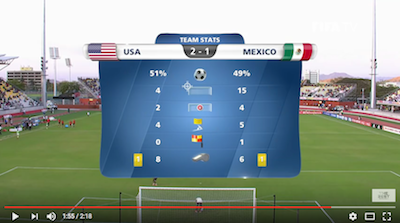 Battle of Twins in USA-Mexico clash

Seven U.S. products started for Mexico against the USA, which came back from a one-goal deficit on goals by subs Ally Watt and Kelcie Hedge, both set up by Ashley Sanchez, for the 2-1 victory. One of the Mexcian-Americans who started for El Tri was Monica Flores, whose twin sister, Sabrina Flores started for the USA. 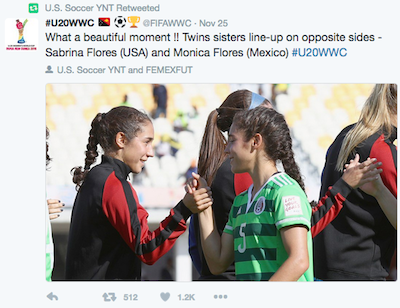 The Flores sisters, New Jersey products, played club ball with PDA Slammers and are in their third year at Notre Dame. Sabrina red-shirted this season while Monica made 14 appearances before joining Mexico for the World Cup. They faced off before, in a 2-2 tie in qualifying play last December in Honduras.

"Generally our parents don't suffer when watching us," Monica told FIFA.com before the game. "On the contrary, they get excited and support us both equally. They just want us to have a good game."

At the final whistle of the quarterfinal, Sabrina delayed her celebrations to console Monica in what the Mexican media called, "The most emotional moment of the Copa." 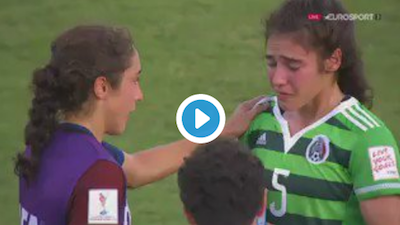